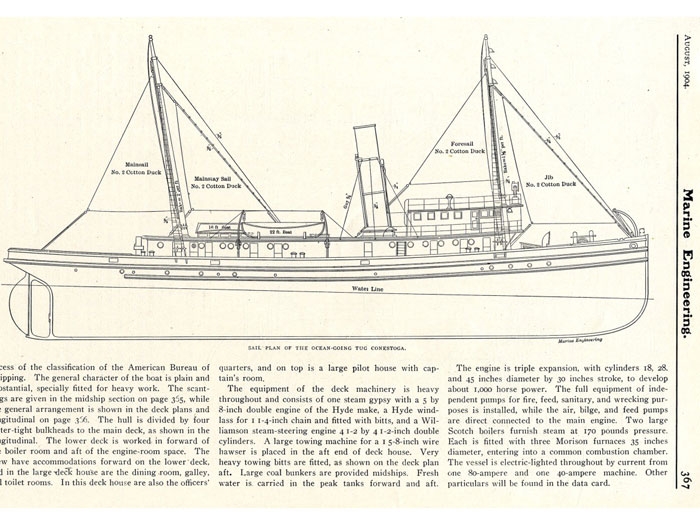 MARCH 24, 2016 — A 1904 issue of Marine Log magazine’s predessor, Marine Engineering, has played a part in helping NOAA and the U.S. Navy confirm the discovery of the USS Conestoga (AT 54) in the Greater Farallones National Marine Sanctuary off San Francisco, 95 years after the Navy seagoing fleet tugboat disappeared with 56 officers and sailors on board.

When it left San Francisco on March 25, 1921, Conestoga was en route to Tutuila, American Samoa via Pearl Harbor, Hawaii. But the ship never made it. For months, Conestoga’s mysterious disappearance gripped newspaper readers across the country. Unable to locate the ship or wreckage, the Navy declared Conestoga and its crew lost on June 30, 1921, the last U.S. Navy ship to be lost in peacetime without a trace.

Then in 2009, NOAA’s Office of Coast Survey documented a probable, uncharted shipwreck around the Farallon Islands.

A further investigation, including a  two-year study to document historic shipwrecks in and near the sanctuary by NOAA and the Naval History and Heritage Command, confirmed it was the Conestoga, solving a 95-year old mystery.

USS Conestoga after its acquisition by the Navy

During a Maritime Heritage cruise in Greater Farallones National Marine Sanctuary in September 2014, a previously undocumented multibeam sonar target thought to be a shipwreck was investigated. It was found to be an unknown vessel of late 19th or early 20th century vintage whose characteristics matched none of the ships known to have been lost in Greater Farallones National Marine Sanctuary.

Utilizing a Remotely Operated Vehicle (ROV) launched from the R/V Fulmar, three survey dives were conducted to characterize the target, which proved to be a 170-foot-long steel-hulled steam-powered oceangoing tug.The wreck was indeed a “mystery” and its discovery was announced with other wrecks as part of the 2014 survey.

The wreck was identified as USS Conestoga after reviewing historical accounts of tugs that departed the Golden Gate and were never seen again and a detailed analysis of the “mystery” tug’s features. A subsequent mission to the wreck in October 2015 provided additional information on the site with selective ROV penetration of the hull and careful examination of diagnostic features which included a 3-inch/50 caliber gun.

An archeological report released by NOAA’s Office of National Marine Sanctuaries reveals that much of identification of the wreck was made by matching its details with those given in the description and drawings of the Conestoga published in the the August 1904 edition of Marine Engineering (which later absorbed a West Coast publication The Log, to become Marine Engineering/Log until 1987, when the name was shortened to Marine Log).

Here’s how our predecessors described the vessel:

The Conestoga is heavily built throughout, being in excess of the classification of the American Bureau of Shipping. The general character of the boat is plain and substantial, specially fitted for heavy work….The hull is divided into four water-tight bulkheads to the main deck….The lower deck is worked in forward of the boiler room and aft of the engine-room space. The crew have accommodations forward on the lower deck, and in the large deck house are the dining room, galley, and toilet rooms.  In this deck house are also the officers’ quarters, and on top is a large pilot house with captain’s room (Marine Engineering 1904:367).

Conestoga was built for the Philadelphia and Reading Railroad Company by the Sparrow’s Point Shipyard of the Maryland Steel Company in Baltimore to tow coal barges and was launched on Friday, November 12, 1903. With the outbreak of World War I and the United States’ subsequent entry into the conflict, the U.S. Navy purchased Conestoga in September 1917.