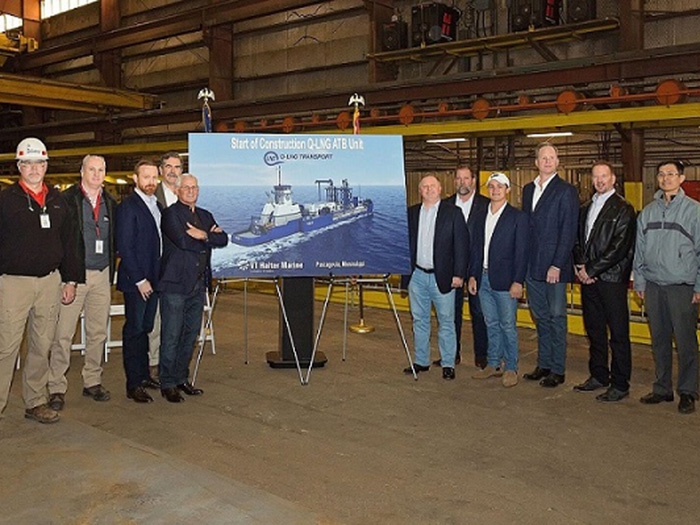 MARCH 9, 2017 — It’s been a busy week for Shane J. Guidry. This past Wednesday, his Harvey Gulf International Marine and 90 affiliated entities each filed a voluntary petition for relief under Chapter 11 of the U.S. Bankruptcy Code in the U.S, Bankruptcy Court for the Southern District of Texas (see earlier story). Among the filings: a form signed by Mr. Guidry estimating that the liabilities involved are between $1 billion and $10 billion.

Be all that as it may, yesterday Mr. Guidry was front and center at a ceremony held at VT Halter Marine’s Pascagoula, MS, shipyard to mark the start of construction on what will be America’s first offshore LNG bunkering ATB, which is being built for another of his ventures, Q-LNG Transport. Formed in November last year, Q-LNG is owned 70% by Shane Guidry and 30% by Harvey Gulf International Marine. The company will use the ATB under a long term charter with Shelll to deliver LNG as a fuel source to various ports in Florida and the Caribbean.

“We are honored to be able to celebrate the official start of construction on the first LNG bunkering ATB unit ever built. We believe that this is a significant step towards the U.S.A. becoming the premier supplier of LNG as the environmentally friendly maritime fuel source of choice,” says VT Halter Marine CEO Rob Mullins at yesterday’s ceremony.

“I’m looking forward to developing a long-term relationship with VT Halter Marine and the ATB project is only the beginning. The cutting of this steel for America’s first LNG ATB bunkering vessel will pave the way for LNG to becoming the marine fuel of the future,” says Mr. Guidry.