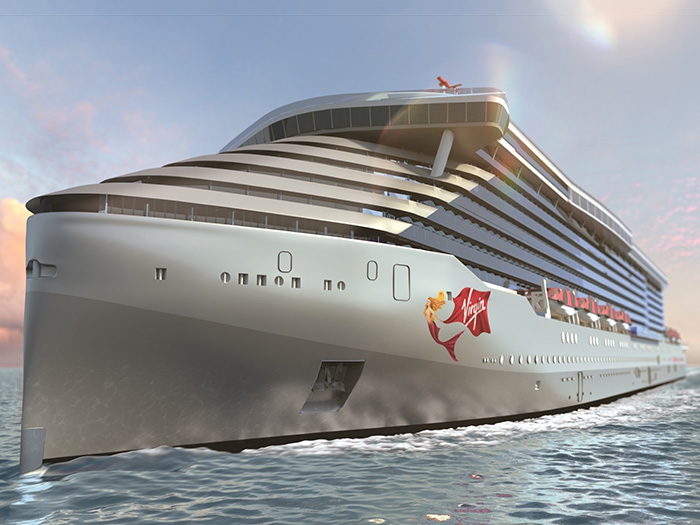 OCTOBER 31, 2017 —Virgin Voyages today laid the keel of the first of the three ships it is building at Fincantieri’s Genoa, Italy, shipyard.

They were joined by Bain Capital Chairman Stephen Pagliuca and Fincantieri’s Alberto Maestrini to weld ceremonial coins into the keel for good luck and smooth sailing.

Virgin Voyages released an artist’s rendering of the ship, which will carry more than 2,700 passengers (the company irritatingly refers to passengers as “sailors”) and 1,150 crew.

According to Branson, the new ship “will be the most recognizable ship sailing the seven seas, delivering an irresistible sailor experience. We’re also committed to making sure our crew are the happiest at sea and will be proud to sail with us.”

“The entire ship will be built with an attention to detail, reflecting the craftsmanship and materiality inspired by super yachts,” said McAlpin. “Designed to feel more intimate and connected to the sea, 86 percent of all cabins will feature a sea terrace and 93 percent an ocean view.”

He also revealed that the first ship will be “Adult By Design”—meaning that passengers must be at least 18 or older to sail. The decision was driven by feedback from future passengers and travel professionals, who are “looking for a more elevated and premium experience, with a few Virgin style surprises.”

The ship’s distinct livery, which will feature a sleek silvery-grey hull, with smoked glass, and distinctive touches of red. The livery was conceptualized by Ben Christie and David Azurdia from Magpie Studio in London. RWD from Beaulieu England, who are specialists in super yacht design, created the vessel’s iconic red Virgin funnel for the vessel.

The ship’s bow will feature a mermaid design, inspired by figureheads on historic sailing ships, by London-based artist Toby Tinsley.

Consistent with its commitment to have one of the cleanest fleets at sea, Virgin Voyages has signed an agreement with waste management system specialist Scanship to “explore the development of potentially game-changing technology that could one day significantly reduce ocean discharge by turning waste into energy.”

Virgin Voyages first ship will arrive at PortMiami in 2020 for her inaugural sailing season.

McAlpin wrapped up the ceremony by introducing Grammy Award-winning artist Boy George, who then performed as the night’s superstar DJ.