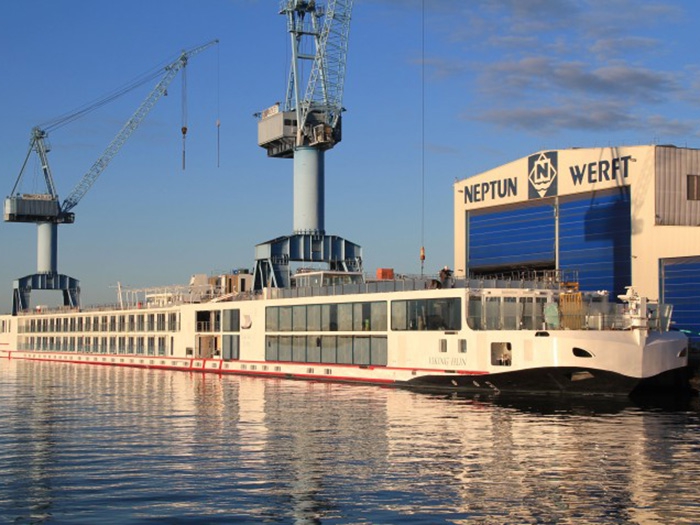 OCTOBER 13, 2017 — Viking River Cruises has placed an order with the Meyer group’s Neptun Werft shipyard in Rostock, Germany, for seven new river ships that will debut in 2019.

The newbuild order includes six additional award-winning Viking Longships that will sail the company’s most popular itineraries on the Rhine, Main and Danube Rivers, and one additional vessel, inspired by the Longships but specifically designed for Portugal’s Douro River.

The orders were announced by Viking Chairman, Torstein Hagen, during a press conference in New York City celebrating the first call in Manhattan for the company’s third ocean ship, Viking Sky. With the addition of the new river ships, Viking will operate a fleet of 69 river vessels around the world in 2019. Also by 2019, Viking will welcome its sixth ocean ship and will become the largest small ship ocean cruise line.

“We knew there was an opportunity to do things differently when we started this company 20 years ago,” said Torstein Hagen, Chairman of Viking. “In the last two decades, we have spent more than $1 billion marketing the concept of river cruising to North Americans, and today we are a household name. The Viking way of exploration has resonated with our target audience of experienced travelers, and this new ship order is a reflection of strong demand for more destination-focused cruises.”

Accommodating 190 passengers in 95 staterooms, Viking Longships have a patented layout that allows for two Explorer Suites – the largest river cruise suites in Europe – as well as seven two-room Veranda Suites with a full-size veranda in the living room and a French balcony in the bedroom; 39 Veranda Staterooms with full-size verandas; and 22 French Balcony Staterooms. Staterooms include comfortable amenities such as hotel-style beds, heated bathroom floors, mini fridge, and both U.S. and EU outlets.

Additionally, all Viking Longships have sustainability upgrades, such as onboard solar panels and organic herb gardens, and energy-efficient hybrid engines that also reduce vibrations.