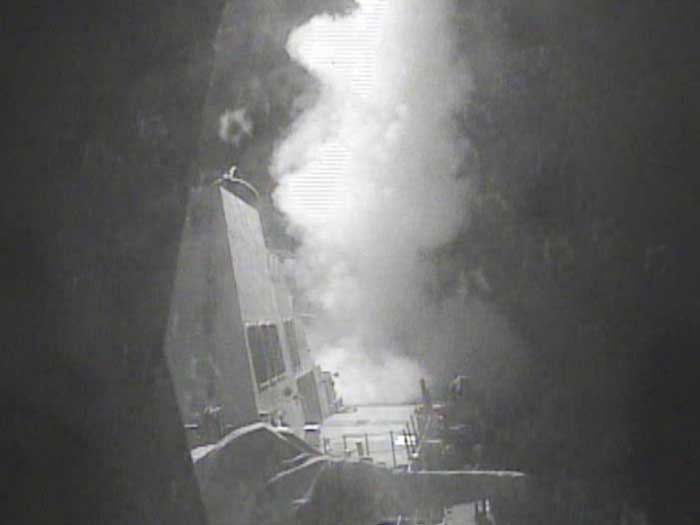 The guided missile destroyer USS Nitze (DDG 94) launches a strike against three coastal radar sites in Houthi-controlled territory on Yemen's Red Sea coast. Due to hostile acts, continuing and imminent threat of force, and multiple threats to vessels in the Bab-al Mandeb Strait, including U.S. naval vessels, Nitze struck the sites, which were used to attack U.S. ships operating in international waters, threatening freedom of navigation. Nitze is deployed to the 5th Fleet area of operations to support maritime security operations and theater security cooperation efforts

The following is a statement released yesterday evening by Pentagon Press Secretary Peter Cook on U.S. military strikes against radar sites in Yemen:

“Early this morning local time, the U.S. military struck three radar sites in Houthi-controlled territory on Yemen’s Red Sea coast. Initial assessments show the sites were destroyed. The strikes — authorized by President Obama at the recommendation of Secretary of Defense Ash Carter and Chairman of the Joint Chiefs General Joseph Dunford — targeted radar sites involved in the recent missile launches threatening USS Mason and other vessels operating in international waters in the Red Sea and the Bab al-Mandeb. These limited self-defense strikes were conducted to protect our personnel, our ships, and our freedom of navigation in this important maritime passageway. The United States will respond to any further threat to our ships and commercial traffic, as appropriate, and will continue to maintain our freedom of navigation in the Red Sea, the Bab al-Mandeb, and elsewhere around the world.”