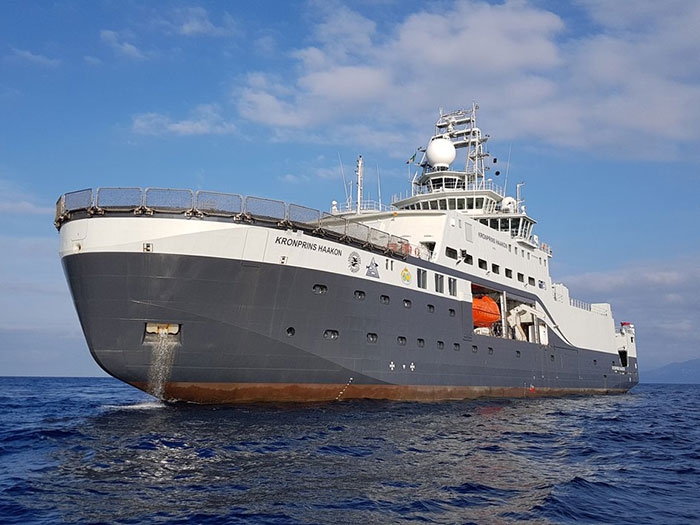 The contract for the vessel, which was built by Fincantieri’s Integrated shipyard of Riva Trigoso and Muggiano, Italy, for Norway’s Institute of Marine Research (IMR) was signed back in November 2013 and at that time delivery was set for early 2017.

In the event, the vessel arrived in Bergen, Norway, shortly before the New Year. The formal change of ownership was completed April 23, 2018.

“We agreed with the Italian shipyard Fincantieri that this was the most practical solution for a quick completion of Kronprins Haakon,” says project director Tore Nepstad at the Institute of Marine Research, who has been responsible to overseeing the construction process from the Norwegian side.

IMR say that Nepstad “does not want to go into detail about what work remains, and describes small and larger tasks.”

Fincantieri and IMR agreed to hold back 25 million Euros of the purchase price to cover the work. At the time the shipbuilding contract was signed, the project was said to have a total value of about 175 million Euros.

Expected completion will be in June. “This will have an effect on planned surveys with the vessel, but it’s too early to say how much,” says Nepstad.

When the vessel does enter service, it will usher in a new era for Norwegian polar research. It will have a cruising speed of 15 knots and be capable of breaking through ice up to one meter thick and will be able go further north and south than any other Norwegian research vessel.

It is equipped with the very latest high-tech equipment, and is designed to meet both existing and new needs in relation to year-round operation, monitoring and data collection in ice-covered and open waters.

While the vessel is owned by the Norwegian Polar Institute, it will be operated by the Institute of Marine Research. UiT, the Arctic University of Norway will be the biggest user of the vessel.

You can learn more about the vessel’s technical capabilities HERE