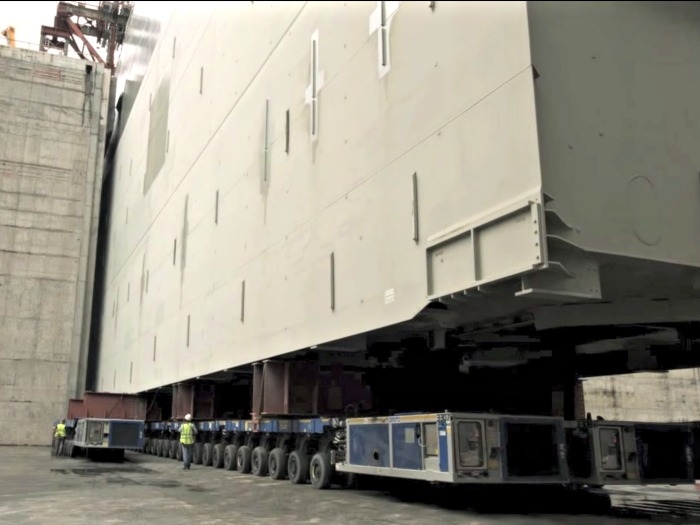 DECEMBER 21, 2014—The Panama Can Authority reports that the first steel rolling gate has been installed on the new locks on the Atlantic side of the Panama Canal Expansion Program, marking another milestone in the massive project. The accompanying video shows the installation of the massive gate.

“This year, the Expansion Program completed several milestones towards the completion of the project,” says Panama Canal Administrator Jorge L. Quijano. “I am proud of the progress we have made on this project and the uninterrupted service we have provided to global shipping for 100 years. Expansion will double our tonnage capacity and reinforces our continual commitment to provide greater service to our customers.”

With the arrival of the last four of the 16 rolling gates for the new locks in November and the transfer of the eight gates for the Pacific-side locks through the waterway, all electromechanical components are ready to be installed. All gates will be installed by mid-2015.

The massive steel gates weigh on average 3,400 tons and vary in size depending on their location (Pacific or Atlantic) and their position on the locks chambers. The tallest of all gates is 33.04 meters high, the equivalent of an 11-story building. Unlike the current canal, which uses miter gates, the expanded canal will have steel rolling gates. The rolling system facilitates gate maintenance.

A major component of the canal’s expansion is the construction of the new locks. Most of the 4.4 million cubic meters of concrete needed has been poured, giving form to the structure and making the locks visible.

To date, the overall program is 83 percent complete, with several major components, such as its dry excavation and dredging projects, already finished. In addition, 94% of the works required to be able to operate the new water level of Gatun Lake have been completed.

Currently, excavations of the Pacific Access Channel (PAC) are 82.2 percent complete. The PAC is a 6.7-kilometer-long channel designed to provide navigation access to and from the new Pacific locks to the existing Culebra Cut section, the narrowest stretch of the Panama Canal. Three of the four PAC phases needed for its execution are now complete.

The fourth and final phase (PAC-4) registered an important milestone this month with completion of the grout curtain for the Borinquen 1E Dam. The construction of the 2.3-kilometer-long, is of particular importance to the project because, after Expansion is completed, the Canal will have two locks in the Pacific side separated by Miraflores Lake. With a water level difference of nine meters between the new channel and Miraflores Lake, Expansion’s new lane will allow ships to bypass the lake altogether by going directly from Culebra Cut to the new locks.