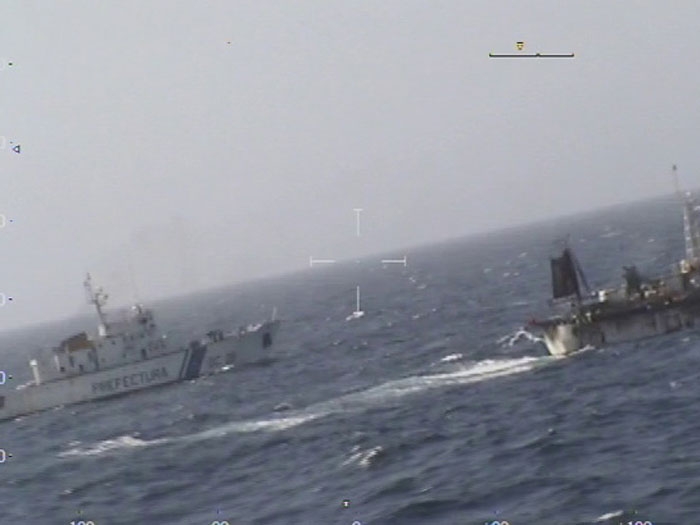 MARCH 16,2016 — An Argentine Coast Guard (Prefectura Naval Argentina) patrol vessel, the GC- 28 Prefecto Derbes, has fired on and sunk a Chinese flag vessel, the Lu Yan Yuan Yu 010, that was illegally fishing off the coast of Patagonia.

According to the Coast Guard, the vessel was detected on Monday night engaged in illegal fishing.

Repeated radio calls — in Spanish and English — and audible and visual signals were made to make contact with the boat, says the Coast Guard. However, the vessel turned off its lights and began sailing towards international waters without answering.

“On several occasions, the offending ship performed maneuvers designed to force a collision with the Coast Guard, putting at risk not only its own crew but coast guard personnel, who were then ordered to shoot at specific areas of the vessel,” the statement added.

The fishing vessel was holed, took on water and subsequently sunk.
The Coast Guard rescued four crew members and their captain, who have been detained by local authorities, with possible charges pending. The remainder of the crew were rescued by another Chinese fishing vessel.

China’s Xinhua news agency quotes spokesperson Lu Kang as saying the Foreign Ministry and Chinese embassy in Argentina have urgently lodged representations with the Argentine side, expressing grave concern over the incident.
China demanded that the Argentine side thoroughly investigate the incident and update the Chinese side, and safeguard Chinese sailors’ security and legitimate rights and interests.

“China urged the Argentine side to take effective measures to prevent such incident from happening again,” Mr. Lu said.