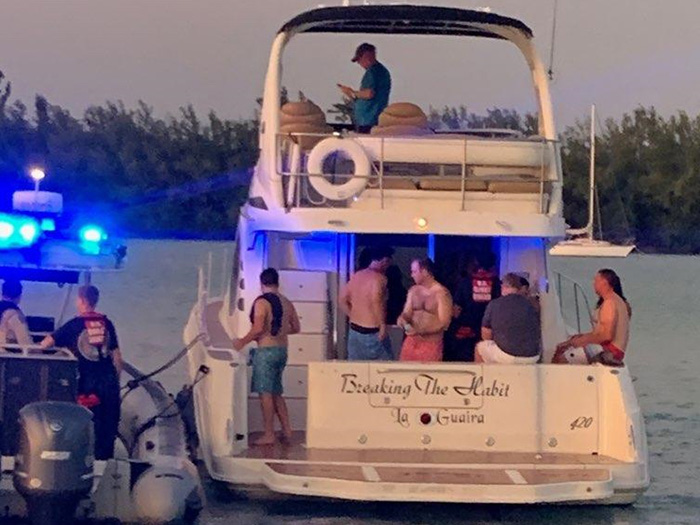 A Coast Guard Station Miami Beach team boarded the 42-foot pleasure craft, Breaking the Habit, after a passenger injury was reported, Sept. 7. It was determined that the vessel was operating in violation of a previous Captain of the Port order and the boarding team terminated the voyage (Coast Guard Photo)

The Coast Guard terminated the voyage of the 42-foot pleasure craft, Breaking the Habit, with 13 passengers aboard, Saturday, near Miami Marine Stadium.

Coast Guard Sector Miami responded after receivinga report of a passenger injury aboard the Breaking the Habit. Miami-Dade Fire Rescue arrived on scene and transferred the injured passenger to Jackson Memorial Hospital.

Watchstanders determined that the vessel was operating illegally and in violation of a previous Captain of the Port order.

“The Coast Guard will continue to aggressively pursue vessel operators who place the lives of patrons at risk by not complying with Coast Guard passenger vessel regulations,” said Lt. Brandon Earhart, commanding officer of Coast Guard Station Miami Beach. “I want to remind people that before getting underway, ask to see the captain’s credentials, vessel inspection certificate, and safety plan. If there is any doubt, don’t go. Don’t put your life and the lives of your family and friends in the hands of an unlicensed operator.”

Owners and operators of illegal charter vessels can face maximum civil penalties of $59,000 for illegal passenger-for-hire-operations and over.

Charters that violate a Captain of the Port Order can face over $94,000 in penalties.

Some potential fines for illegally operating a charter vessel are: