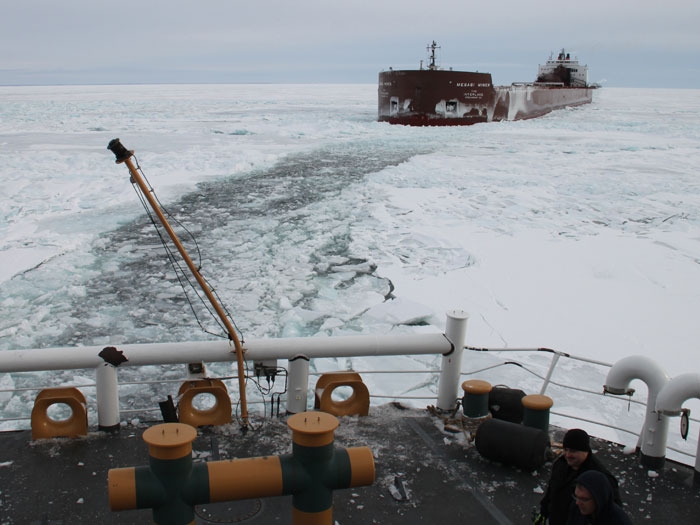 JANUARY 7, 2014 — It looks like rear-enders can happen on the Great Lakes as well as the highways. The U.S. Coast Guard Cutter Hollyhock arrived in St. Ignace, Mich., Sunday night (January 5) after being involved in a collision with Interlake Steamship’s 990-foot motor vessel Mesabi Miner in northern Lake Michigan Sunday morning.

The Hollyhock is a 225-foot sea-going buoy tender homeported in Port Huron, Mich., and was conducting an ice escort at the time of the collision.

At about 10:45 a.m., the Hollyhock was breaking ice in front of the Mesabi Miner when the collision occurred. The cutter’s crew reported significant damage to the stern and fantail, as well as two punctures in the hull about 20 feet above the waterline. The crew of the Mesabi Miner, en route to Gary, Ind., reported a 12-inch crack in the bow about 4 feet above the waterline and said the bow was pushed in about 8 to 12 inches.

No pollution or injuries have been reported concerning the incident and neither vessel has reported any flooding.

The Hollyhock arrived and moored up in St. Ignace at about 8:30 p.m., Sunday.

It is currently undergoing a complete damage assessment. The Coast Guard Cutter Biscayne Bay, a 140-foot ice-breaking tug, homeported in St. Ignace, escorted the Hollyhock as a precaution.

The Mesabi Miner will unload its cargo in Gary, Ind., and then the damage and planned repairs will be assessed.