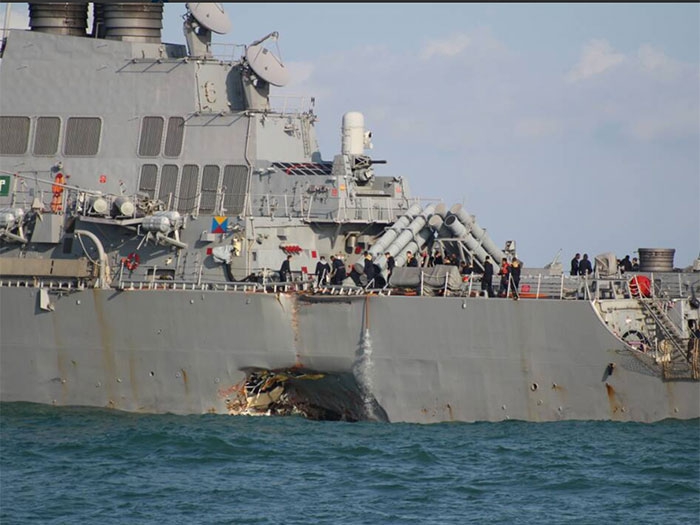 AUGUST 20, 2017—The U.S. Navy has reported that the guided-missile destroyer USS John S. McCain (DDG 56) was involved in a collision with the 50,700 dwt Liberian flagged tanker Alnic MC while underway east of the Straits of Malacca and Singapore on Aug. 21.There are currently 10 sailors missing and five injured.The collision was reported at 6:24 a.m. Japan Standard Time on Aug. 21, while the ship was transiting to a routine port visit in Singapore.A family assistance center has been established. Families can call 011-81-46-816-1728 (international) or 243-1728 (DSN on base).The ship is currently sailing under its own power and heading to port.Search and rescue efforts are underway in coordination with local authorities. In addition to tug boats out of Singapore, Republic of Singapore Navy Fearless-class patrol ships RSS Gallant (97), RSS Resilience (82), RSN helicopters and Police Coast Guard vessel Basking Shark (55) are currently in the area to render assistance.MV-22s and SH-60s from USS America are also responding.Alnic MC is a 600-foot, 30,000 grt oil and chemical tanker.

According to the Equasis date base, the vessel’s ISM manager is Stealth Maritime of Athens, Greece. The ship manager and registered owner is Energetic Tanker Inc. of the Marshall Islands.

The incident comes within days of the Navy finding that a June 17 collision involving another destroyer, USS Fitzgerald (DDG 62), was “avoidable” and taking disciplinary measures that included relieving the vessel’s commanding officer, executive officer and command master chief of their duties (see earlier story)

UPDATE: USS John S. McCain (DDG 56) arrived at Changi Naval Base Monday morning under its own power. Seventh Fleet says that significant damage to the hull resulted in flooding to nearby compartments, including crew berthing, machinery, and communications rooms. Damage control efforts by the crew halted further flooding.

There are currently 10 Sailors missing and five injured. Four of the injured were medically evacuated by a Singapore Armed Forces helicopter to a hospital in Singapore for non-life threatening injuries. The fifth injured Sailor does not require further medical attention.

Search and rescue efforts continue in coordination with local authorities.