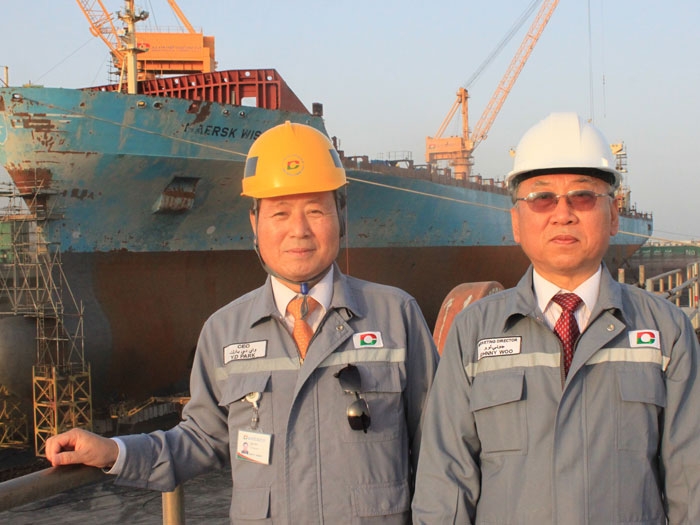 The occasion was marked by a special ceremony at the shipyard, which cost $1.5 million to build and had its official grand opening in 2012. The yard is managed and operated by Daewoo Shipbuilding and Marine Engineering Co. Ltd. (DSME) of Korea and has two ULCC sized graving docks.

ODC Chief Executive Yong Duk Park called the 200 vessel drydocking milestone “a powerful statement to the industry that ODC is now a major player in the Middle East.”

“We have worked enormously hard to develop a robust track record working on a wide variety of ships from Very Large Crude Carriers (VLCCs) to container ships to LNG and LPG carriers to chemical carriers dredgers, RO-ROs and barges,” he said. “We can now show the shipping industry we not only have world class facilities, which include our massive dry docks which can accommodate any size of vessel, but we are developing the workforce, skills base, training and infrastructure that our customers demand.”

“ODC has a passionate driving ambition to become one of the prime ship repair yards in the world and the Middle East,” he said.  “We know we can deliver on quality, cost and critically time. Our geographical location thrusts us into pole position for the Asia to Europe shipping route as well as the East African and Indian off shore industries.  We can further slash costs and the time required for drydocking as vessels do not need to greatly deviate their course. This can save days in time, and a huge amount of money, which is such a key factor for shipping operators balancing tight budgets. Other key selling points include our unrivalled painting services and ability to deal with sludge and slops disposal.  With painting we have the perfect climate that few other yards can offer. With slops we can save up to three days sailing time as we can deal with it all here on site, there is no need to sail to another location. We intend to market all these benefits hard in the coming months and years.”

“Our focus moving forward will be to win more business from existing and new customers operating carriers, tankers and containerships,” he said. “We see real potential for growth particularly in becoming a center of excellence for the repair of containerships and LNG carriers (LNGC). As a result we will be ramping up the promotion of our services, which are among the most advanced in the world. This includes offering customers the in depth technical support we receive from our partner Daewoo Shipbuilding and Marine Engineering Company Ltd (DSME) and its subsidiary DSEC.  2014 will see DSEC forge a closer partnership with ODC to provide specialist LNGC repair technology. This will cover areas such as cargo containment systems and the supply chain of various materials such as INVAR, insulation boxes, membranes, prefabricated panels and cryogenic safety valves. Meanwhile, we are also investing in new facilities including renovating our cryogenic shop so it can cater to repairing up to four LNGCs at any one time. Our expansion into LNGC will further be strengthened by our new license to support the French engineering firm Gaztransport & Technigaz (GTT) which specializes in cargo containment systems for high-end LNG carriers.”