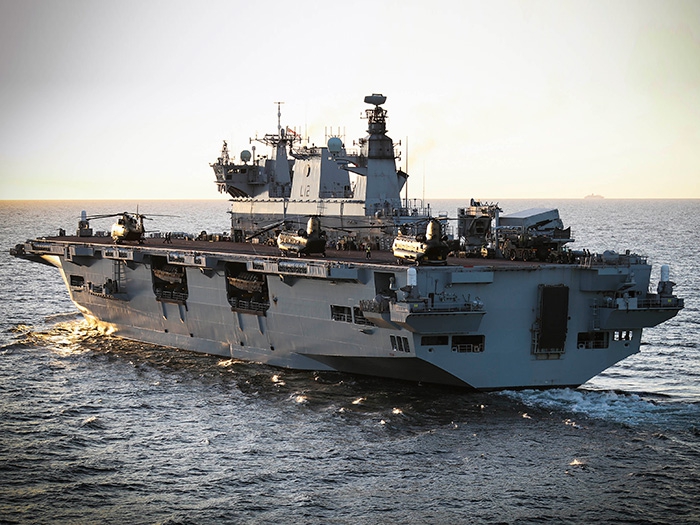 FEBRUARY 20, 2018 — The U.K. has agreed the sale of its current flagship, the helicopter carrier HMS Ocean, to Brazil.

According to the U.K. Ministry of Defence, she has been sold for around £84 million (about $118 million) and the profit generated from the sale “will be reinvested in defense at a time when the Royal Navy is being strengthened with two types of brand new frigates and two huge aircraft carriers.”

The first of these new carriers, HMS Queen Elizabeth, which will eventually take on the role as the nation’s new flagship, recently set sail from the port of Gibraltar carrying two Chinooks and four Merlin helicopters as she readied for helicopter trials at sea.

HMS Ocean was constructed in the mid-1990s by the Kvaerner Govan shipyard on the River Clyde and fitted out by VSEL at Barrow-in-Furness and was commissioned in September 1998. Since entering service in 1998, she has covered more than 450,000 nautical miles.

The long-planned decision to take her out of service in 2018, as she reaches the end of her planned service life, was confirmed in 2015.

Her military record spans from Operation Palliser during the Sierra Leone civil war to Operation Ellamy as part of an international coalition in Libya in 2011.

The sale of HMS Ocean was managed by the U.K.’s Defence Equipment Sales Authority (DESA).

Clive Walker, Head of DESA, said: “We have a proven track record of supplying surplus defense equipment on a government to government basis. The successful sale of HMS Ocean to the Brazilian Navy will provide a financial return to the U.K. which will now be reinvested in defense.”

HMS Ocean will decommission from the Royal Navy in March, with plans for the Brazilian Navy to take possession of the ship in June 2018. Modifications to the ship will be made by U.K. companies Babcock and BAE Systems in the meantime, with this work funded by Brazil.