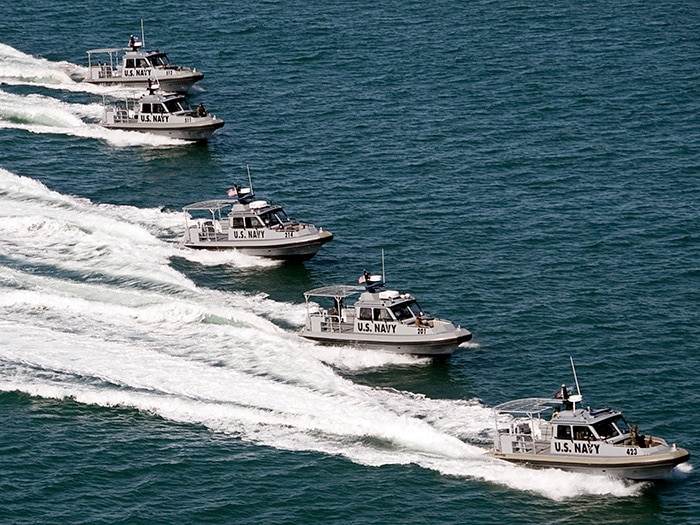 Several 34-foot Dauntless Sea-Arks from Maritime Expeditionary Security Squadron 3 patrol the waters of San Diego Bay, Feb. 19, 2009. The U.S. has pledged ten of these vessels to Ukraine as part of a $450 million security assistance package.

In the last month, the U.S. pledged more than $1.4 billion in security assistance to Ukraine. Some of that assistance is aimed at helping the Ukrainian military better defend its coast and waterways, says the U.S. Department of Defense.

On Thursday, the U.S. promised $450 million in security assistance through presidential drawdown authority. Included in that package were 18 coastal and riverine patrol boats.

“These are largely to protect the riverways and to enable Ukraine to maintain its control of the riverways. They can also be used in … close-in coastal areas,” said a senior defense official during a briefing today at the Pentagon.

To contribute to coastal defense, the official said, the United States, along with partner and allied nations, have provided the Harpoon system. Earlier this month, the U.S. committed to the donation of two Harpoon launch systems, which the Ukrainians have asked to have mounted on trucks. Other nations have also agreed to provide the Harpoon missiles themselves to be used in those launchers.

“This will be helpful in enabling the Ukrainians to defend … Odessa and other positions along the Black Sea coast,” the official said.

“Obviously with each of these packages, we [also] provide a lot of spare parts,” the official said. “We want to make sure they can keep the systems up and running.”