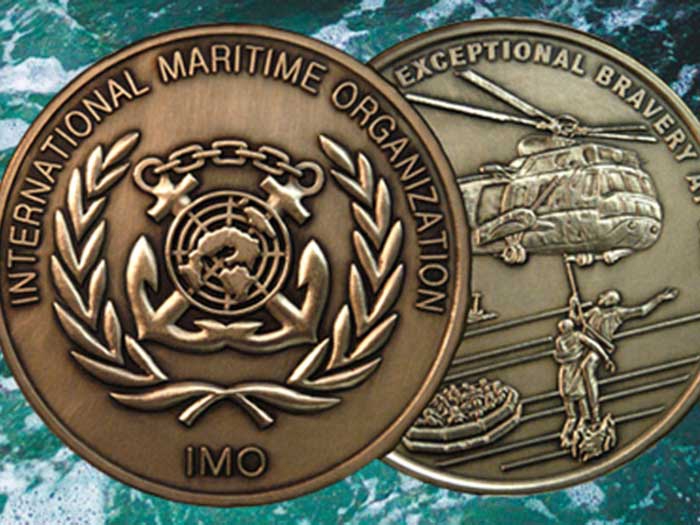 AUGUST 9, 2017 — Two members of the Houston Pilots are to receive the 2017 IMO Award for Exceptional Bravery at Sea. They will be recognized for their role in averting a major tragedy when the ship they were piloting broke down and burst into flames after colliding with mooring dolphins.

Despite being surrounded by a towering wall of burning fuel for nearly 90 minutes, pilots Captain Michael G. McGee and Captain Michael C. Phillips showed decisiveness, dedication and ship-handling expertise. As a result of their courageous actions, no lives were lost, serious damage to pier structures and petro-chemical facilities were prevented and a major marine pollution incident was avoided.

The incident occurred shortly after midnight on September 6, 2016, when Captain McGee and Captain Phillips were piloting the 247 m-long tanker Aframax River in the Houston Ship Channel. The size of the tanker meant it required two pilots.

A sudden mechanical failure of the engines resulted in a loss of control and led to the ship striking two mooring dolphins. A fuel tank ruptured, causing a spill of diesel fuel that quickly ignited. The ship was engulfed in flames which reached up to 60 to 90 m high. The raging fire quickly spread across the channel, threatening other tank ships and nearby waterfront facilities, and enveloped the area in thick toxic smoke.

Despite the imminent danger, at great risk to their own lives, both pilots remained at their stations on the bridge of the ship during the fire. Captain McGee managed to maneuver the blazing vessel away from surrounding ships and facilities. Captain Phillips coordinated communications and firefighting efforts with the U.S. Coast Guard and numerous local fireboats. Captain Phillips rushed to grab a fire extinguisher and put out a fire raging on the port bridge wing.

The inferno was finally extinguished after 90 minutes, leaving both pilots exhausted and suffering minor burns. Captain McGee, using tugs, was then able to bring the damaged tanker safely to a mooring facility.

Captain McGee and Captain Phillips were nominated by the International Maritime Pilots’ Association (IMPA). The Award was decided by a Panel of Judges and endorsed by the IMO Council at its 118th session in London last month.

The 2017 IMO Award for Exceptional Bravery at Sea will be presented during a ceremony to be held during the 30th session of the IMO Assembly in November.