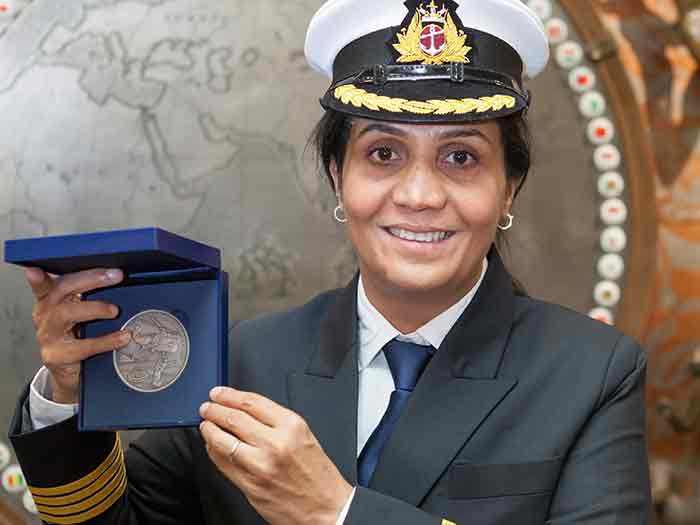 Captain Radhika Menon, Master of the oil products tanker Sampurna Swarajya, received the 2016 IMO Award for Exceptional Bravery at Sea for the rescue of severn fishermen during a severe storm

OVEMBER 23, 2016 — The Master of an oil tanker who says she was “just doing her job” has become the first woman to received IMO’s highest IMO bravery recognition after saving the lives of seven fishermen during a tumultuous storm in the Bay of Bengal in June 2015.

“It is every seafarer’s and Master’s solemn duty and obligation to save souls in distress at sea,” said Captain Radhika Menon, Master of the oil products tanker Sampurna Swarajya. “I just did what a seafarer should do for a fellow soul in distress at sea. Yes, it was an instant decision, but not without assessing the risks involved. I just did my duty.”

She was speaking after IMO Secretary-General Kitack Lim presented her with the 2016 IMO Award for Exceptional Bravery at Sea on Monday.

Captain Menon is the first woman captain in the Indian Merchant Navy and was nominated for the award by the Government of India, for her great determination and courage in leading the difficult rescue operation to save all seven fishermen from the fishing boat Durgamma. The boat was adrift following engine failure and loss of anchor in severe weather. Food and water had been washed away and they were surviving on ice from the cold storage.

Through wave heights of more than 25 feet, winds of more than 60 knots and heavy rain, on 22 June 2015, the second officer on the Sampurna Swarajya spotted the boat 2.5 kilometers away, off the coast of Gopalpur, Orissa.

Captain Menon immediately ordered a rescue operation, utilizing the pilot ladder and with life jackets and buoys on standby. It took three arduous attempts in wind and rain and heavy swells, before all seven weak and starving fishermen, aged from 15 to 50 years old, were brought to safety on board the ship.

Their families had already given them up for dead and were preparing for their funeral rites. But thanks to the rescue, led by Captain Menon, they were reunited with their loved ones a few days later.

Rescued fisherman Dasari Danayya, speaking in his home town of Kakinada, Andhra Pradesh, said that without Captain Menon, they would not be alive.

“We could do nothing except wipe the tears from our eyes. Madam appeared as a goddess, and saved our lives,” he told The Shipping Corporation of India, in a video broadcast during the ceremony.

Captain Menon began her seafaring career as a radio officer and progressed to being a deck officer and later was appointed as Master of the Sampurna Swarajya.

The annual IMO Award for Exceptional Bravery at Sea was established by IMO to provide international recognition for those who, at the risk of losing their own life, perform acts of exceptional bravery, displaying outstanding courage in attempting to save life at sea or in attempting to prevent or mitigate damage to the marine environment. For 2016, 23 nominations were received from nine Member States and one inter-governmental organization.