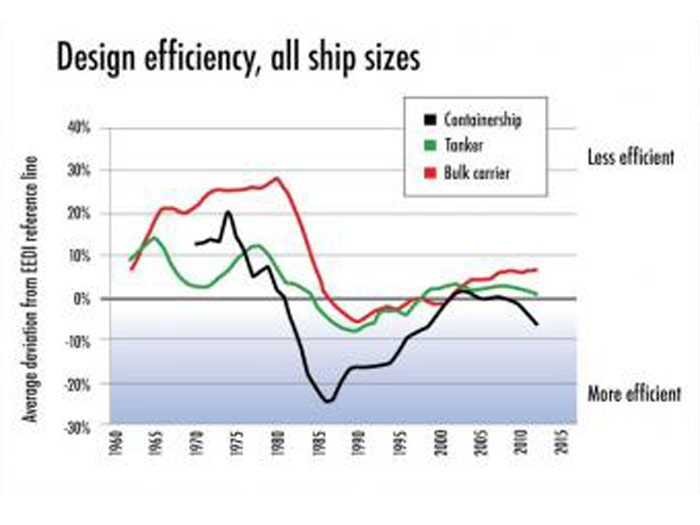 APRIL 14, 2015 — So much for “eco” ships. It seems that not too many shipowners can have been ordering them. A new study of the historical development of the efficiency of new ships appears to shows that ships built in 2013 were on average 10% less fuel-efficient than those built in 1990.

The study, “Historical trends in ship design efficiency,” has been carried out by Netherlands-based CE Delft, which describes itself as an “independent research and consultancy organization specialized in developing innovative solutions to environmental problems.” It was commissioned by  Seas At Risk and Transport & Environment (both members of the Clean Shipping Coalition), and supported by the European Climate Foundation.

The EEDI standard is up for review next month and organizations such as Seas at Risk and Transport & Environment will be using the study as ammunition to make the EEDI standard much tougher.

Among the study’s findings are that bulk carriers, tankers, and containerships built in 2013 were on average 12, 8 and 8% less fuel efficient than those built in 1990, a quarter of a century ago.

In general, the study indicates the design efficiency of new ships improved significantly in the 1980s, was at its best in the 1990s and deteriorated after that. In the case of bulk carriers, design efficiency in the 1980s and 1990s was up to 10% better than in the period 1999–2008. A similar pattern can be observed for tankers and containerships.

In the 1980s design efficiency improved by up to 28% in the case of tankers. Similar patterns exist for bulkers and container ships, and also for specific size categories of these ships. In the 1990s the design efficiency of tankers deteriorated by over 10%.

So, what’s been going on?

The study says that the changes in design efficiency reflect changes in market circumstances. Higher fuel prices make fuel-efficient ships more attractive, because efficiency reduces the total cost of ownership. Because in general fuel-efficient hull designs are more expensive to built, the payback period of the additional capital expenditure is shorter when fuel prices are high.

Fuel prices, though, are not the only relevant factor: freight rates are also an important factor. When freight rates are high, new ships are in high demand and shipbuilders can build standard designs with a low risk and a high profit margin. In these circumstances, it may not be rational for shipyards to build higher risk innovative designs. Conversely, when freight rates are low, shipyards compete for clients and may be willing to build more efficient ships.

There can be several other reasons why shipowners choose to build ships that are less fuel-efficient. One is that in some ports and canals, ship dimensions are restricted. In order to be able to maximize transport work, ship owners can choose to choose to maximize cargo capacity within these constraints. This is especially attractive when freight rates are high and fuel prices are low. The second is that fuller form ships are cheaper to build as they require less steel and also less manpower to assemble. So when steel prices and wages are high while fuel is cheap, fuller form ships become more attractive.

Fuller form ships, of course, require more energy to shove them through the water,

According to the study’s authors, Jasper Faber and Maarten ‘t Hoen,  “the relevance of this study for the ongoing review of EEDI targets is that it shows that ships can improve their design efficiency by about 5-15% on average just by going back to 1990s designs. If one takes into account improvements in engine technology, and hull, rudder and propeller designs in the past 25 years, larger efficiency improvements are probably within reach. Lower design speeds could improve design efficiencies even more.”

Read the study HERE and make your own assessment.