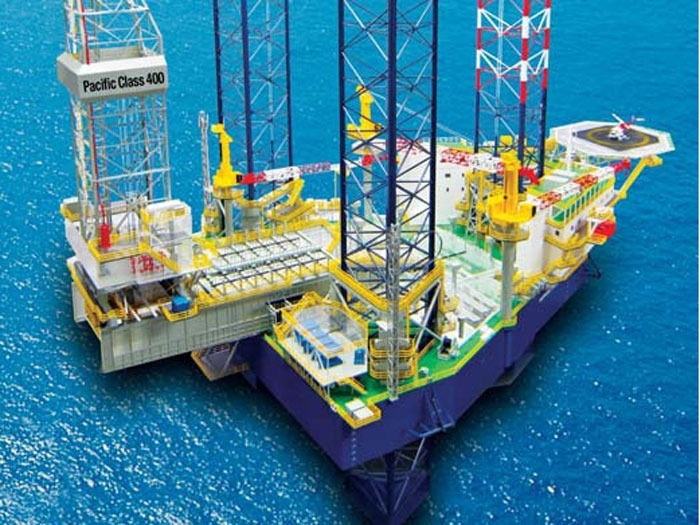 For the rig building sector, 4Q 2013 turnover at S$1,197 million was 38% higher as compared with S$870 million for the same period in 2012.  The increase was attributable to the initial recognition of the second unit of the Group’s repeat drillship design, one accommodation semisubmersible rig and two jack-up rigs.  On a FY 2013 basis, turnover increased 51% to S$3,564 million as compared with S$2,356 million in 2012.   A total of eight jack-up rigs comprising of diverse designs were delivered during the year.  These deliveries include four jack-ups from the Group’s proprietary Pacific Class 400 design series, two Friede & Goldman JU3000N design rigs and two remaining units based on the Friede & Goldman JU2000E design.

The Group reports a net order book of S$12.3 billion with completion and deliveries stretching into 2019.  This includes S$4.2 billion in contract orders secured in 2013, excluding repair and upgrade contracts.

It says that “the global economy remains fragile and uncertain” and that “amid the volatile economic conditions and a competitive landscape,” it remains focused on its core business.  Moving ahead and in anticipation of a tight labou supply situation, the Group will further improve operational efficiency, productivity and safety management as well as ensure timely delivery of projects to its customers, although margin remains challenging.

Demand remains strong for Sembcorp Marine’s big docks, including the four VLCC dry docks that commenced operations at the Group’s new 73.3-hectare Sembmarine Integrated Yard at its Tuas Phase I facility in August 2013.  The new shipyard will position Sembcorp Marine for long-term sustainable growth with its innovative design, advanced automation and optimized facilities.

Construction on Estaleiro Jurong Aracruz, Sembcorp Marine’s wholly-owned shipyard in Brazil, continues to progress well and the yard remains on track to commence initial operations in second half 2014.