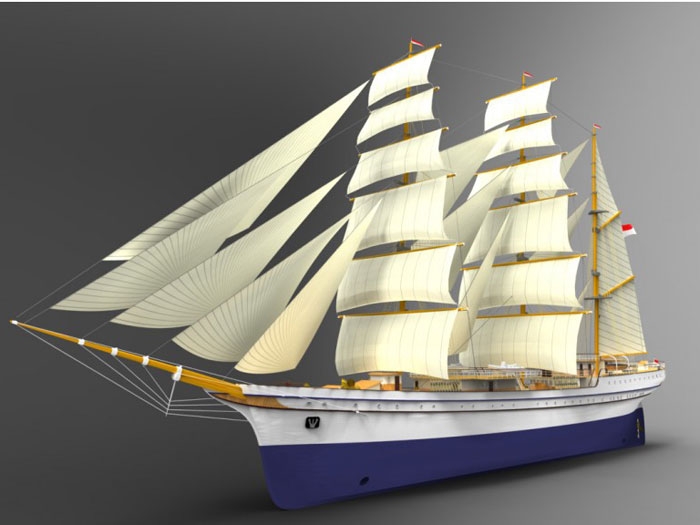 Ordered by the Defense Ministry of the Republic of Indonesia to train Navy cadets, the ship, named Kri Bima Suci, will have accommodations for 200 people on board, 120 of them being cadets in training.

“We’re very happy to have won this unusual order, unusual in the sense that orders anywhere in the world for the building of such a large sailing vessel of 100 m and over are few and far between,” said Lex Nijsen – Head of Four-Stroke Marine – MAN Diesel & Turbo. “In this particular case, we enjoy a long and fruitful relationship with the Indonesian Navy, which already uses MAN engine types in its fleet, and – in this respect – an MAN engine was the natural choice for such a fine vessel. I also feel that fulfilling the demands for such an unusual application bears testament to the strength of our medium-speed program.”

MAN Diesel & Turbo has prior experience with sailing ship orders and has previously re-engined the 113-m Esmeralda, a four-mast barquentine, for the Chilean Navy. In 2006, the company reengined the 104-m Fregata Libertad for the Argentinean Navy.

Tall ships often serve a dual purpose. In addition to training new recruits, they are often used for courtesy visits to other countries with their presence being viewed as more diplomatic than a call by a modern naval vessel.

MAN Diesel & Turbo has a long relationship with the Indonesian Navy and recently signed a contract for the delivery of MAN 20V28/33D STC engines for two frigates due to enter service in 2017.