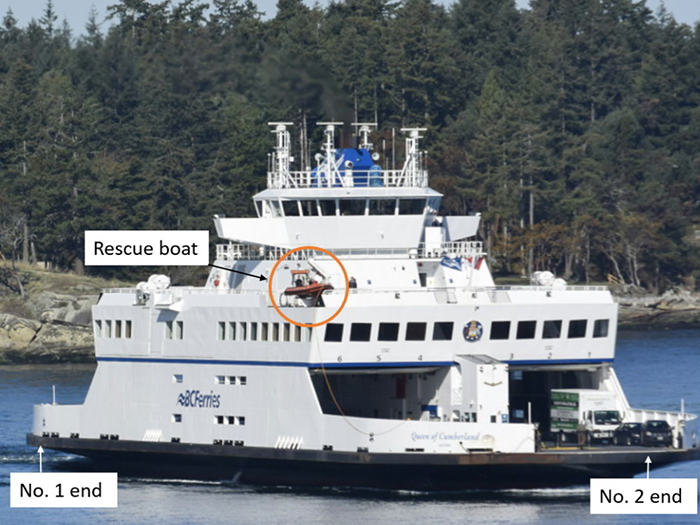 In an investigation report (M18P0087) released today, the Transportation Safety Board of Canada found that incorrect securement led to the 2018 uncontrolled fall of a rescue boat from the passenger ferry Queen of Cumberland in Swartz Bay, British Columbia.

On April 18, 2018, the crew members on the Queen of Cumberland, operated by BC Ferries Services Inc., were using the davit, to raise the vessel’s rescue boat out of the water during a drill, when the hoist cable broke. The rescue boat and the two crew members aboard it fell approximately 11 meters to the water. Both were injured, one seriously, and the rescue boat was damaged.

The investigation found that the rescue boat painter (rope) was not secured with sufficient working length, thus exerting a force on the rescue boat and cable as it was being raised. The resulting side load caused the hoist cable to get pinched and break, resulting in the boat falling into the water along with the two crew members.

The Queen of Cumberland underwent a mid-life upgrade in 2016, during which certain vessel equipment, including the rescue boat davit, was changed. However, the investigation found that corresponding updates to operation and maintenance procedures were not made and that, although BC Ferries identified some of the missing updates, others went unidentified and unresolved.

If changes in equipment aboard ships are not managed effectively and necessary updates to maintenance systems and schedules are not made, there is a risk that maintenance will be inadequate or overlooked. Additionally, if changes to operational procedures and training are not made, the crew may not be proficient in the use of the equipment. Both of these factors increase the risk of equipment failures, accidents, or injuries.

Following the occurrence, BC Ferries restricted personnel from being on board rescue boats while these are being raised or lowered, except during emergencies. The company has also provided updated training on the operations and limitations of rescue boat davits, and updated its maintenance procedures.