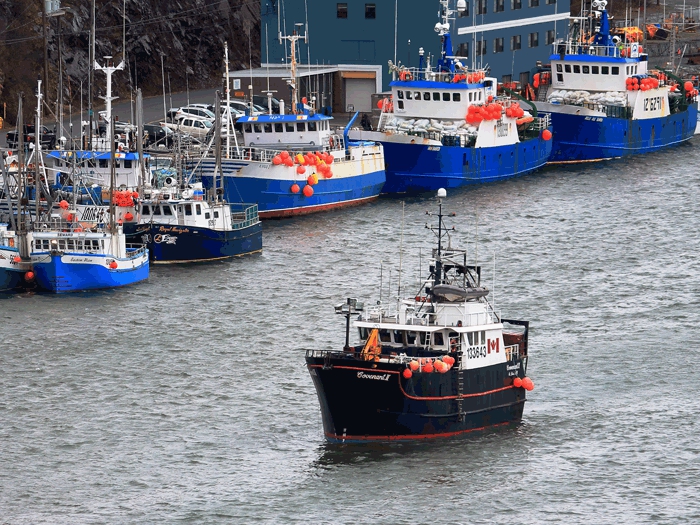 The commercial fishery has been part of the lifeblood of Eastern Canada for more than five centuries. Adjacency to the fishing grounds was the initial catalyst for the settling of the near countless harbors, coves and inlets throughout the five provinces that border the rich, pristine waters of the North Atlantic. And while the technology and vessels used to prosecute the fishery has changed over the generations, the industry in Newfoundland and Labrador, Nova Scotia, New Brunswick, Prince Edward Island and Quebec is more valuable than it has ever been.

According to the most recent statistics from the federal Department of Fisheries and Oceans (DFO), the value of all seafood produced in the five Eastern Canadian Provinces totals an impressive $2,387,424. This number is quite staggering when you think about it. Few industries in this region produce products that contribute this much to the economy and gross domestic product (GDP) in one year.

As one would expect, a wide variety of species contribute to the overall multi-billion dollar total. But it will come as no surprise to anyone associated with the fishery or seafood industry in Eastern Canada what group or species really drives the industry here — shellfish. This group of crustaceans accounts for an impressive $2.37 billion.

Lobster is king in Eastern Canada, with a value in excess of $942 million and shows no sign of slowing down. Lobster catch rates are increasing year-over-year. Combine this with record prices and you have the formula for a very valuable and sustainable fishery.

Next in order of economic importance is snow crab, contributing $534 million, followed closely by Northern shrimp at $369 million. Scallops round out the top four shellfish species at $178 million.

The seafood industry continues to be a strong employment driver in the region, responsible for more than 50,000 direct jobs - both seasonal and permanent - in the harvesting and processing sectors. This, of course, does not include the thousands of spin-off jobs associated with the fishery and millions of additional dollars pumped back into the Eastern Canadian economy.

While the fishing industry is producing literally billions of dollars in product each year, it is not without its challenges. In fact, few industries in Eastern Canada, if any, have faced the adversity the fishery has over the decades – including dwindling stocks, quota cuts, labor shortages, constant conflicts with the federal government and building competition from outside Canada. Those catching and producing seafood in this region have seen and experienced it all – but have always persevered.

Northern Cod Stocks
The biggest story coming out of the Eastern Canadian fishery as of late involves groundfish stocks – cod in particular.

In 1992 the Federal Government of Canada declared a moratorium on the Northern Cod fishery, which for hundreds of years had largely shaped the lives and communities of Canada's Eastern coast. After it was discovered in the late 1980s that the Northern cod biomass had fallen to one per cent of its historical levels, the fishery was essentially shut down, ending the region's 500-year dependence on Northern cod.

But cod is making a comeback.

A 2015 study into the state of Northern cod stocks off Newfoundland and Labrador confirmed a dramatic recovery for a species that became virtually commercially extinct in the 1990s — a confirmation that commercial fishermen have been documenting and commenting on for several years.

The study, co-authored by well-known and respected fisheries scientist George Rose, reported that the cod biomass has increased from tens of thousands of tonnes to more than 200,000 metric tonnes within the last decade and shows signs of continued growth. In fact, Canada’s federal Department of Fisheries and Oceans (DFO) recently reported that according to its research, the spawning stock biomass was actually in the range of 300,000 metric tonnes.

The news of the groundfish recovery has been met with optimism— so much so that DFO just announced in August of this year, the first expanded commercial Northern cod fishery in decades.

Another bright spot for the Eastern Canadian fishing industry is the Comprehensive Economic and Trade Agreement (CETA) between Canada and the European Union. Once ratified in 2017, this free trade agreement will lead to the dropping of the punishing tariffs now applied to Canadian seafood exported to the member states of the EU. Not only will this agreement increase the profitability of Eastern Canadian seafood companies now shipping product overseas, but will open up a vast array of new, hungry markets, with an appetite for fresh, top quality Canadian seafood.

Shipbuilding Resurgence
When any industry is doing well and its participants are prospering, that good fortune has a tendency to spill over to related spin-off and supply companies – and the Eastern Canadian fishing industry is no exception.

One area that has seen a renewed revitalization in recent years is the region’s shipbuilding industry.

Many Eastern Canadian yards, that a decade ago were either shuttered or only producing a few vessels per year, have sprung back to life and are now at capacity – with many booked up to three-four years. New fishing vessels are in demand in Eastern Canada more than ever and the region’s naval architects and builders are just trying to keep up.

Rick Young is witnessing this growth and resurgence in shipbuilding first hand. Young is a Director and Owner of TriNav Marine Design and Marine Services International – two St. John’s, Newfoundland-based companies that design and provide in-depth technical assistance to the Eastern Canada shipbuilding and marine sectors.

“There was considerable vessel construction activity in Newfoundland and Labrador from 1995 to about 2005, mostly related to changes in the industry from harvesting groundfish to harvesting shellfish. Nova Scotia and the other Eastern Canadian provinces have seen a steady growth in vessel construction in the past five years or so due to strong market prices for lobster and also because much of the fleet was getting old and required replacement,” Young said.

He noted that fishermen have lobbied hard over the years and have been successful to have DFO change many of their vessel size restrictions.

“This has allowed fishermen to construct larger and safer vessels that can travel further offshore for longer periods of time, while increasing quality with such features as live wells and refrigerated sea water tanks.”

Now with the potential for a renewed groundfish fishery in the near future and continued strong prices for shellfish, fishermen are willing to invest further in newer and multi-purpose vessels, Young added.

“This will allow them to be more diversified, have a longer fishing season and be more profitable. Fishermen it seems, always find a way to adapt to the changes in the industry and persevere. We will be there with them side-by-side to help make this happen.”

The optimism expressed by industry leaders, such as Rick Young, seems to be contagious throughout the Eastern Canadian fishery.

After years of uncertainty, combined with the constant nattering of the naysayers mumbling about how the fishery will soon be no more, the industry is on the upswing – driven by positive factors that could help this still valuable business turn the corner and further increase in value.

Just as sure as the strong Northeast winds will continue to buffet the shores each year, those prosecuting the seafood industry in Eastern Canada will stand by their resolve and continue to produce the products that continue to drive the growth and evolution of this critically important, multi-billion dollar machine called the fishery.

Kerry Hann is the Managing Editor of The Navigator Magazine, the largest publication covering the marine and fishing industries in Eastern Canada. Hann, based in St. John’s, Newfoundland and Labrador, has been covering the North Atlantic fishery and other natural resources-based issues in various capacities for nearly 25 years.