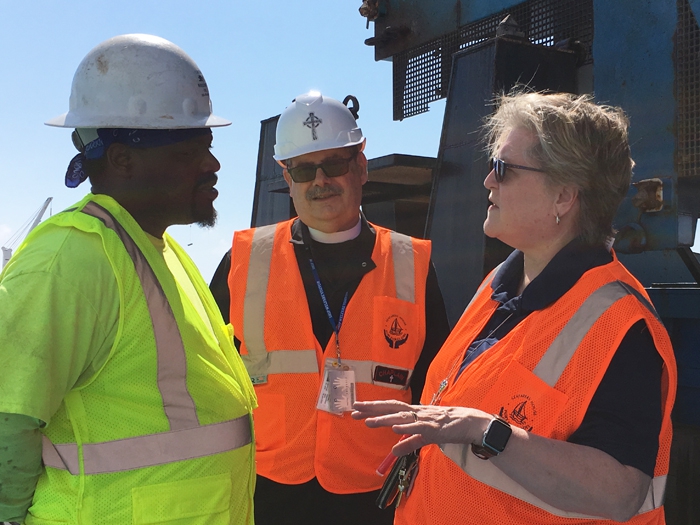 Lesley Warrick, Father Sandy and a mariner during a ship visit

OCTOBER 11, 2018 — The life of a sailor has been romanticized in books, movies, and songs. But in reality, life on the high seas is anything but romantic—there are long days filled with difficult and dangerous work and months away from home. Few people realize the important role that seafarers play in the world’s economy. Without them, the bulk transportation of important raw materials, food, medicine and manufactured goods would not be possible.

Seafarers’ House, a Fort Lauderdale, FL-based nonprofit organization, offers mariners who come to Port Everglades from around the world a variety of services. A small oasis tucked away at the port, it provides pastoral care, free WiFi to connect with friends and family, a convenience store stocked with food and other necessities, emergency assistance, transportation, and other services that mariners have come to rely on year-round.

The mission was founded in 1989 by Chaplain Maria Jimenez-Mesenbring, a seminary intern from Spain, who saw a need for not just pastoral care at the port, but a place where mariners could gather, grab a snack, watch television, play pool, listen to music, and just be off the ship for a few hours.

Seafarers’ House began with four phones in a 400-square-foot hospitality center to a 4,300-square-foot-facility that hosts more than 150,000 crewmembers each year.

Mariners are greeted by Father Sanford “Sandy” Sears who offers them a cheerful smile and a sympathetic ear. There also are several other members of the volunteer pastoral care team representing a variety of faiths who provide religious services, counseling and spiritual resources.

“We are here for them seven days a week, 365 days a year, offering respite from the daily grind,” said Father Sandy.

As the holidays near, Seafarers’ House takes its annual Shoebox Chirstmas into high gear. Launched a decade ago, Shoebox Christmas is a collaborative effort between the pastoral care team and a group of volunteers headed by Seafarers’ House Board Member Dr. Jill Novacek, PhD.

Dozens of volunteers collect, wrap and fill shoeboxes with socks, soap, shaving cream, work gloves and other personal items and deliver them to the mariners where they live and work – shipboard. Last year, approximately 1,500 shoeboxes were delivered. This year the goal is to reach 2,000.

“These are people who work long hours under difficult conditions, far from home. Many are away from family and friends and miss being able to open packages and share in the joy of giving and receiving,” said Seafarers’ House Executive Director Lesley Warrick. “Our Shoebox Christmas is one way we can brighten their day.”

Although the organization holds a number of fundraisers each year, it also relies on donations and sponsorships year round. It recently launched a capital campaign to raise funds to replace its aging infrastructure. The new 15,000-square-foot facility will be built on an expanded footprint inside Port Everglades.

For its annual Shoebox Christmas, Seafarers’ House accepts in-kind donations, including athletic white socks, combs, deodorant, shaving cream and other personal items, along with playing cards. Cash donations are also accepted: $12 supports the cost of a wrapped shoebox and $22 supports a box plus a $10 Sim Card to help mariners connect with their families back home. Deliveries begin in November and end in January.

Already on board to support Shoebox Christmas 2018 are Cliff Berry, Inc., National Liquidators and National Maritime Services, Total Marine Solutions, and Lloyd’s Register. Businesses, churches, schools and other organizations also can host a donation drive or take part in shipboard deliveries. Donations can be made online at seafarershouse.org or by calling 954-734-1580.

Do you have a story to share on your marine company’s charitable work? If so, we’d like to hear from you. Write to us at [email protected]. Be part of Marine Log’s #MaritimeCares.