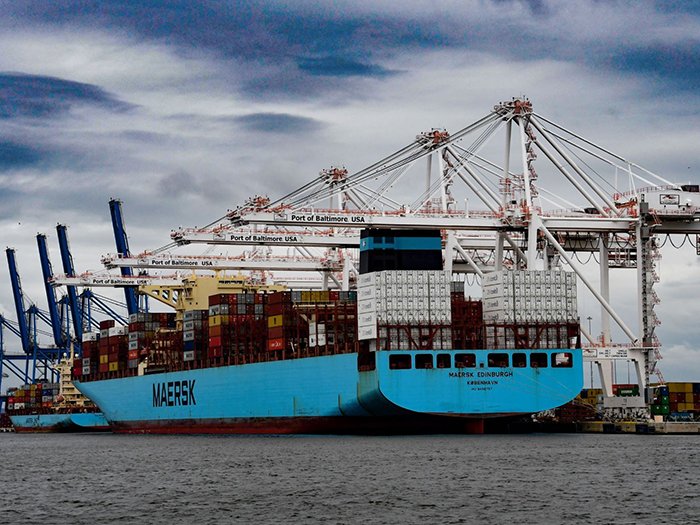 The Port of Baltimore has completed its greatest ever number of container moves from a single ship, with 5,536 moves conducted over three days by longshore workers handling the Maersk Edinburgh. This beat the port’s previous record of 5,181 moves, set last year.

Container moves are the number of times an imported container is unloaded from a ship, as well as when an export or empty container is loaded onto a ship.

“This record container activity is a significant milestone for the Port of Baltimore and a sign that the maritime shipping industry is coming back and fueling Maryland’s economic recovery,” said Gov. Larry Hogan. “The container growth at the Port of Baltimore shows the benefits of public-private partnerships in delivering infrastructure more quickly and stretching state and federal dollars by also relieving the state of the long-term infrastructure maintenance costs.”

The Maersk Edinburgh has a capacity of 13,092 TEU containers. The supersized vessel arrived at the Port of Baltimore on August 16 and departed late last night.

Maersk Line is a member of the 2M shipping alliance with Mediterranean Shipping Co., which also includes a strategic cooperation slot-sharing arrangement with another global shipping line, ZIM Line.

“We’re seeing more containerized cargo coming into the Port of Baltimore because we maximize cooperation with the private sector,” said William P. Doyle, executive director of the Maryland Department of Transportation Maryland Port Administration (MDOT MPA). “The Port of Baltimore thrives on its growing, open-for-business focus to attract partnerships, including e-commerce-related warehousing, distribution and fulfillment centers.”

Large ships such as the Maersk Edinburgh can call on the Port of Baltimore because of infrastructure that can accommodate some of the largest vessels in the world. The 50-foot berth that allows access for these ships was built as part of the public-private partnership (P3) between MDOT MPA and Ports America Chesapeake, which operates Seagirt Marine Terminal. In addition to the deeper berth, the 50-year agreement, reached in 2009 in the wake of a national recession, generated thousands of jobs, installed four supersized container cranes at the Port and also included $100 million for Maryland roads, bridges and tunnels.

Work is progressing on a second 50-foot berth that will allow the Port to accommodate two massive ships at the same time. That berth, and four additional supersized cranes, are expected to be operational by summer 2021. The $116.4 million investment includes $103 million from Ports America, $7.8 million from the state and $6.6 million in federal funding.