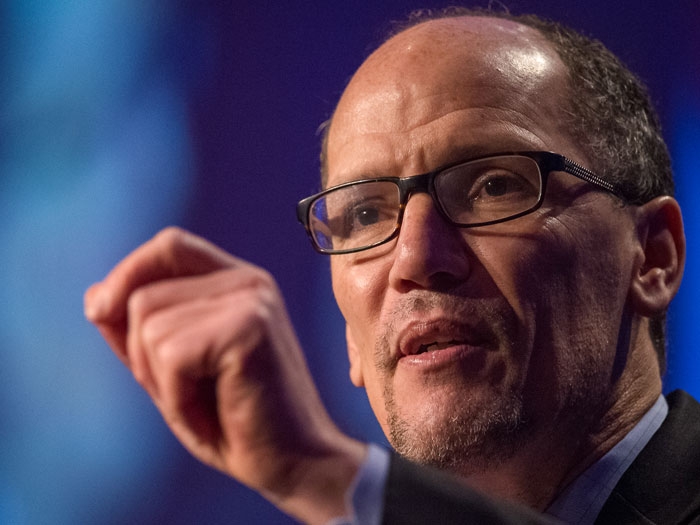 FEBRUARY 24, 2015 — A tentative agreement has been reached between the International Longshore and Warehouse Union (ILWU) and the Pacific Maritime Association (PMA) on a new five-year contract covering workers at all 29 U.S. West Coast ports.

The two sides apparently reached an accord after pressure by U.S. Secretary of Labor Tom Perez. According to an AP report, Secretary Perez told both sides last Thursday that if they didn’t reach an agreement by the next day, they would have to leave California and negotiate in Washington. Reportedly West Coast port city mayors learned about the deadline in a Thursday evening call Secretary Perez had with them.

A joint statement from ILWU President Bob McEllrath and PMA President James McKenna said that parties will not be releasing details of the agreement at this time and that it is still subject to ratification by both parties.”After more than nine months of negotiations, we are pleased to have reached an agreement that is good for workers and for the industry,” the joint statement said. “We are also pleased that our ports can now resume full operations.”

Negotiations had been underway since June last year in what had become an increasingly bitter dispute.

The international Transport Workers’ Federation (ITF) welcomed the tentative agreement and called it  “a win for dockers the world over.””We congratulate the ILWU and PMA for finally coming to agreement on a new labor contract,” said National Retail Federation President and CEO Matthew Shay.  “It is now time for the parties to quickly ratify the deal and immediately focus on clearing out the crisis-level congestion and backlog at the ports.”

The deal was reached with assistance from U.S. Secretary of Labor, Tom Perez, and Federal Mediation and Conciliation Service Deputy Director, Scot Beckenbaugh.

“I am extremely pleased to announce today that after extensive negotiations and mediation provided by the FMCS and with the support and assistance of Secretary of Labor Tom Perez, Secretary of Commerce Penny Pritzker, and Los Angeles Mayor Eric Garcetti, representatives of the ILWU and PMA have tentatively agreed to a new contract, resolving all outstanding issues that divided them and that have affected operations at U.S. west coast ports.  Due to the complexity of the issues the parties had to address, these have been lengthy and at times difficult negotiations. The parties persevered over a long and challenging process and were ultimately successful in averting any further situations that could have been disruptive to shipping operations and to the nation’s economy. “As a result of their efforts, shippers can expect that normal operations will be restored as soon as possible at our nation’s west coast ports. At the FMCS, we are proud and honored that we were able to assist the parties and contribute to this successful negotiation.

“I want especially to acknowledge the extraordinary contributions of FMCS Deputy Director Scot Beckenbaugh, who led our Agency’s efforts in assisting the ILWU and PMA in their negotiation, and I especially want to thank Secretary Perez and Secretary Pritzker for their leadership these past few days. We are grateful for their efforts and for their commitment to bringing this significant negotiation to a positive resolution.”