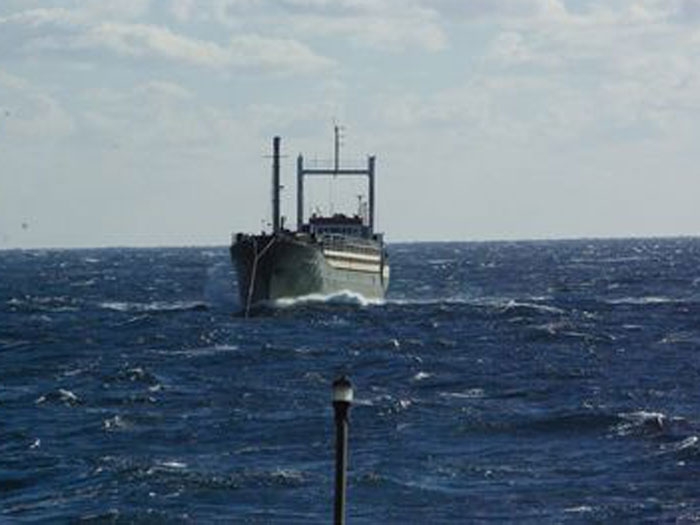 JANUARY 2, 2015 — In two incidents within days of each other, people smugglers abandoned ship and left hundreds of refugees to their fates as the rust buckets into which they had been crammed plowed through rough seas towards disaster off the Italian coast.

In both cases only Italian Coast Guard-directed response efforts averted disaster and there are fears that ship abandonment may now become a calculated technique aimed at exploiting the presence of search and rescue forces.

In the most recent incident, the Sierra Leone-flagged Ezadeen, a 50-year-old cattle carrier, was drifting without power about 40 miles off the Italian Coast with 450 people on board when the Italian Coast Guard intervened with three Coast Guard officers taking control after being landed by helicopter.

The ship was subsequently taken under tow by the Icelandic Coast Guard vessel Tyr. It is operating as part of the EU Frontex “Joint Operation Triton.”

The Ezadeen incident came within two days of an incident that saw the Moldovan-registered Blue Sky M come within five miles and 45 minutes’ sailing time of a disaster when it was boarded and brought under control. It was carrying an estimated 900 migrants.

It had apparently also been abandoned by its crew and put on autopilot. However, Italian police yesterday arrested four men they said were the captain and crew of the Blue Sky M. Prosecutors investigating the incident believe the four did not leave the ship, as originally believed, but mingled with the migrants after abandoning the vessel to its fate.

The Icelandic Coast Guard says that, since joining the operation on December 1, the Tyr has been involved in four rescues where nearly 2,000 people have been rescued.

As the situation in Syria has deteriorated, adding to the flow of would be migrants from Africa, Italy has had to deal with a massive surge in migrants hoping to reach Europe by sea. Though more than 170,000 people have been rescued in the last 14 months, an estimated 3,000 have died trying to make the crossing.

Though the Ezadeen and Blue Sky M incidents have now drawn media attention to the situation, it has been of ongoing concern to the international maritime industry.

At a high level UN Human Rights Day event in Geneva in December, IMO Secretary General Koji Sekimizu said that putting large numbers of people into unseaworthy boats and creating distress situations was “an abuse of the traditional humanitarian activity firmly established in the maritime world” and said that the people smugglers “have the clear intention to misuse the presence of navy vessels, coast guard patrol boats and merchant ships. Clearly, the smugglers have no regard for the safety of human life.”

He called for the consideration of alternative ways of achieving the “safe, lawful and regulated passage of migrants, rather than only relying on established search and rescue procedures to rescue needlessly endangered persons.”

Sekimizu said “migrants do not possess boats and somebody must have arranged the boats, the fuel and the boats’ operators and then set sail with hundreds of migrants, against all safety regulations. Action must be taken to prevent this organized crime in the first place.”