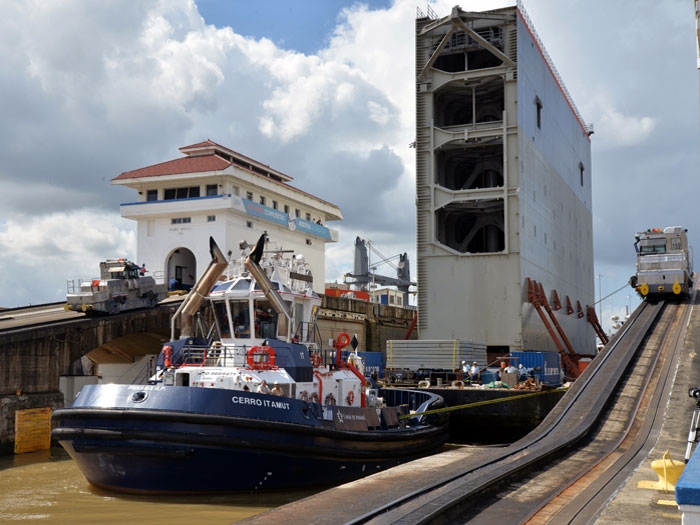 The last of eight gates, one of the heaviest at 4,200 tons, being pulled by tugs through the Panama Canal to the Pacific side of the waterway

DECEMBER 11, 2014—The last of eight gates for the construction of the new locks for the Pacific side of the Panama Canal expansion project recently completed its transit through the waterway. As we reported earlier, the transits began on October 22 to move all eight gates through the waterway aboard a barge from the temporary dock on the Atlantic side to the Pacific, assisted by Panama Canal tugs.

The new locks will have 16 rolling gates, eight in the Pacific and eight in the Atlantic. With this last transit, all gates will be in the new locks ready for installation during the next couple of months

Since August 2013, the gates have been arriving in staggered shipments from Italy on a Post-Panamax vessel to a temporary dock on the Atlantic side. The last shipment arrived in November 2014.

The Panama Canal Expansion is 82% complete, according to the Panama Canal Authority. It consists on the construction of a third lane of traffic allowing the passage of bigger vessels, which will double the Canal’s capacity and have a major impact on world maritime trade.