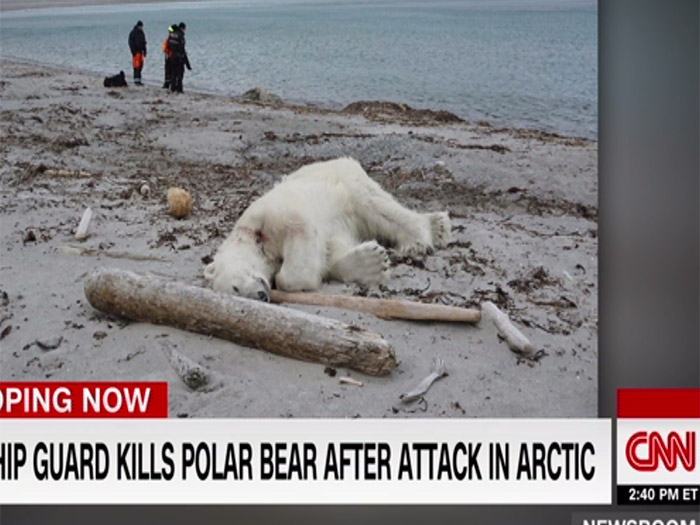 JULY 30, 2018 — Germany’s Hapag-Lloyd Cruises is facing a public backlash after an incident in which one of its employees shot and killed a polar bear during a visit to Spitsbergen, the largest island on Norway’s Svalbard archipelago, by the cruise ship Bremen.

Polar bears are widespread in Spitsbergen and cruise lines visiting it are required to carry guards to ensure that there are no polar bears in the area before passengers land.

What went wrong? Here’s the cruise line’s explanation of what happened:

This Saturday on a trip ashore in Spitsbergen during a Bremen cruise an incident occurred: a polar bear guard – an expert employed by the cruise line – was attacked on land by a polar bear. The guard suffered head injuries, however, he was responsive after the attack and was airlifted. He is out of danger, with no threat to life. In an act of self-defense, unfortunately, it was necessary for the polar bear to be shot dead. We very much regret this incident. Hapag-Lloyd Cruises is very aware of its responsibility when traveling in environmentally-sensitive areas and respects all nature and wildlife.

To illustrate the situation: Spitsbergen is a large geographical area, about one and a half times the size of Denmark. Landings are possible only in a few places; these are not there to serve the purpose of polar bear observation, on the contrary: polar bears are only observed from aboard ships, from a safe distance. To prepare for a shore leave, the polar bear guards go ashore in advance after sighting the landing site as a group and without passengers. They then set up a land station and check the area again to make sure that there are no polar bears in sight. As soon as such an animal approaches, the shore leave would be stopped immediately.

The incident occurred when the four-person polar bear guard team, who are always on board for these expedition cruises as required by law, prepared for a shore leave. One of the guards was unexpectedly attacked by a polar bear that had not been spotted and he was unable to react himself. As the attempts of the other guards to evict the animal, unfortunately, were not successful, there had to be intervention for reasons of self-defense and to protect the life of the attacked person. The injured person was immediately provided with medical care and flown to a hospital with a rescue helicopter. We are in personal, direct contact with him. His condition is stable and he remains responsive.

Hapag-Lloyd Cruises has worked comprehensively and cooperatively with the Norwegian authorities to reconstruct and clarify the incident on the ground and will continue to do so.

Hapag-Lloyd Cruises has been traveling to these destinations for many years with an experienced crew. The cruise operator is respected in the destinations as a responsible partner and the experts actively inform the guests about the appropriate behavior required in these areas. We are extremely sorry that this incident has happened.