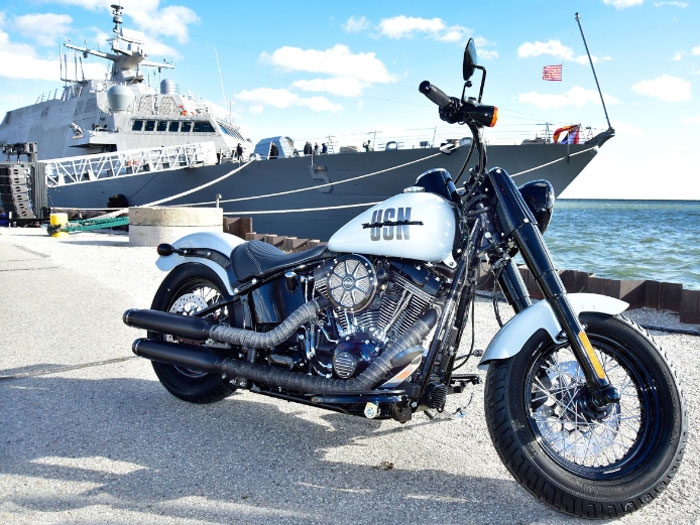 The motorcycle will be on display during USS Milwaukee Commissioning Week, followed by appearances at U.S. Navy, industry and STEM events over the next year, culminating with its sale at a charity auction to support the National Military Family Association (NMFA).

"We wanted to do something special for the occasion and support the families of our military men and women who sacrifice so much to protect our freedoms," said Stephanie C. Hill, Lockheed Martin vice president of Ship & Aviation Systems. "We're excited to collaborate with Milwaukee's own Harley-Davidson, a company that has been fulfilling dreams of personal freedom for over 100 years."

"We are honored to be a part of this one-of-a-kind endeavor," said NMFA Executive Director, Joyce Wessel Raezer. "Both Lockheed Martin and Harley-Davidson have been such wonderful supporters of the military and their families, and we couldn't be happier to be a part of this commemoration."

Following commissioning, USS Milwaukee will transit to its homeport in San Diego, CA, where it will be integrated into the fleet and the industry-Navy team will conduct additional program testing and crew training before the vessel begins its first deployment.

NOVEMBER 20, 2015 — To commemorate tomorrow’s commissioning of LCS 5, the USS Milwaukee, in its namesake city, prime contractor Lockheed Martin (NYSE: LMT) has collaborated with Milwaukee-based Harley-Davidson on a one-of-a-kind motorcycle to honor the U.S. Navy and the city.