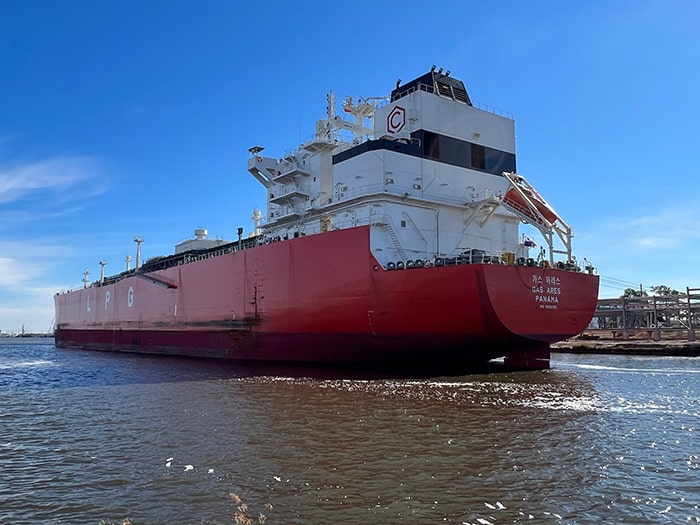 The National Transportation Safety Board has released its report on a November 25, 2021 incident involving a 754-foot-long, 106-foot-wide LPG carrier, the Gas Ares, that led to more than $1 million in damages.

The vessel was transiting upbound on the Neches River in Port Neches, Texas, when it struck the outermost of two harbor tugs moored alongside the no. 1 loading dock at the Motiva Port Neches Terminal.

The tug Sabine was outboard on the channel side with the tug Florida moored inboard and alongside the dock, both facing up river.

The Sabine’s mooring broke, and the tug was pushed into the adjacent tug Florida and moved up river. The Florida, which had four crewmembers on board, was driven against the dock but remained moored.

The Gas Ares’s port bow sustained minor damage consisting of an indentation and scratch in the shell plating above the waterline. No postcasualty survey was conducted.

At the time of the incident, the Gas Ares was under the navigational control of a state licensed pilot from the Sabine Pilots.

Following is the NTSB report’s analysis of the incident:

“As the 106-foot-wide Gas Ares was transiting through the Neches River at half ahead at 8.1 knots, at 2208, the pilot of the Gas Ares hailed the outbound 688-foot-long tow Chad Douglas and proposed a starboard-to-starboard passing. Setting the vessel up to meet the tow, the pilot of the Gas Ares favored the left (south) part of the 400-foot-wide navigation channel—the same side where vessels were moored at the Huntsman and Motiva docks. At 2212, about 4 minutes after arranging the passing, the pilot ordered the Gas Ares to dead slow ahead to avoid making a wake as the LPG carrier passed a pipeline removal project (to starboard outside of the navigation channel), and about 6 minutes later, the vessel was only making about 3.8 knots. The pilot’s decision to order the vessel’s speed reduced in anticipation of passing the pipeline removal project was what initiated the eventual collision with the Sabine at the Motiva no. 1 dock.

“As the Gas Ares approached the Huntsman dock (where an ATB was moored), Motiva dock no. 2 (where the 144-foot-wide tanker Wonder Polaris was moored), and the Chad Douglas tow, the pilot faced a close-quarters passing with the vessels moored at each dock. The pilot had the tug Hayley Moran—which had been made fast to the stern of the Gas Ares—pull the Gas Ares’s stern to starboard to keep it from falling onto the Wonder Polaris. At the same time, she issued rudder and engine orders intended to keep the LPG carrier from falling farther south and point its bow back into the channel. North-northwesterly winds at 18–27 knots exerted pressure on the exposed (in-ballast) starboard-side hull above the waterline (the 0.4-knot current likely had little impact on the immersed portion of the hull). Thus, the vessel—which was already on the left side of the narrow channel for the passing arrangement with the Chad Douglas tow—was set farther toward the left and the Huntsman and Motiva docks. With the pilot’s ordered reduction of the ship’s speed, the Gas Ares’s rudder became less effective, and the pilot was not able to move the vessel to starboard and away from the nearby moored vessels by rudder and engine alone. The pilot’s efforts to use the stern tug to pull the Gas Ares’s stern back to starboard and the center of the channel caused the LPG carrier’s bow to point more toward the left side of the channel and moored vessels. Without enough headway, the pilot was unable to steer the vessel back to the center of the channel and avoid striking the moored Sabine at the Motiva no. 1 dock.”

The National Transportation Safety Board determines that the probable cause of the collision between the liquefied petroleum gas carrier Gas Ares and the tug Sabine, moored alongside the tug Florida at the Motiva Port Neches Terminal no. 1 loading dock, was the pilot’s decision to reduce the vessel’s speed in order to create less wake when passing a pipeline removal project, causing a loss of rudder effectiveness in strong crosswinds that set the carrier toward moored vessels.