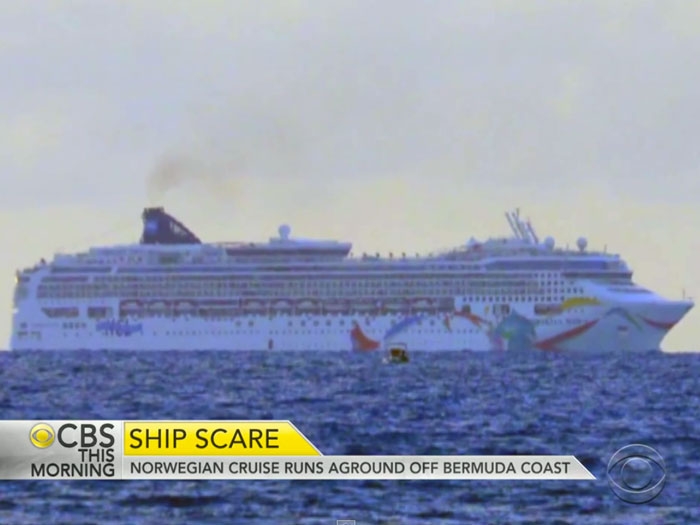 MAY 20, 2015 — Norwegian Cruise Line’s Norwegian Dawn was this morning safely moored back in Bermuda, after an incident that started about 5.00 p.m. yesterday when the cruise ship temporarily lost power when departing King’s Wharf.

According to Norwegian Cruise Line, Norwegian Dawn “had a temporary malfunction of its steering system, causing the ship to sail slightly off course as the ship was departing Bermuda, resulting in the vessel making contact with the sea bed. All guests and crew are safe and there were absolutely no injuries.

“The ship’s officers, engineers and an independent dive team have confirmed the structural integrity of the ship. With high-tide this evening, the ship was floated and moved to a nearby anchorage position where it will remain overnight. The ship will be thoroughly inspected in Bermuda by DNV GL, the ship’s classification society, before returning to Boston. The ship is fully operational with the full complement of onboard services available to guests.

“The ship is sailing on a seven-night Boston to Bermuda cruise with 2,443 passengers and 1,059 crew.”

Bermuda’s Royal Gazette reported Bermuda’s Minister of Tourism Development and Transport, Shawn Crockwell, as saying “Efforts were made to refloat the ship at high tide around 10.26 p.m. Government tug boats were on hand to assist and the ship was successfully refloated shortly after 11 p.m.