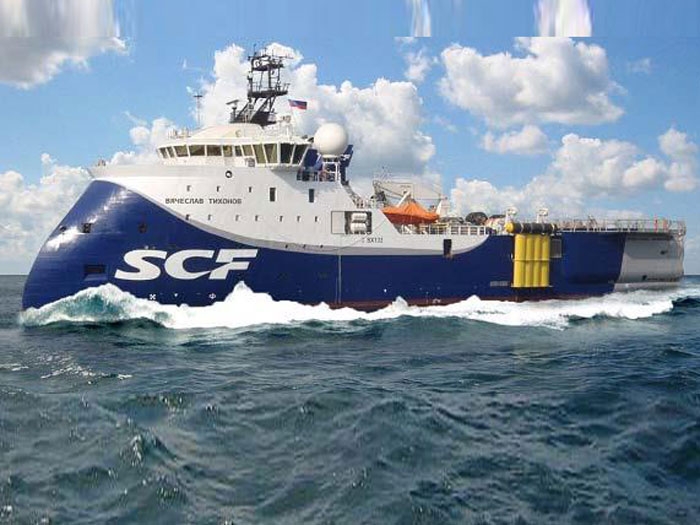 The contract will see Nordic Maritime collaborate with Sovcomflot of Russia and will feature that group’s seismic survey vessel Vyacheslav Tikhonov .

The Vyacheslav Tikhonov will survey approximately 1,000 sq km of ocean bed. The project will also include the acquisition of gravity and magnetic data alongside the seismic data near Nizamapatnam Bay.

The Vyacheslav Tikhonovis an 8-streamer Ulstein X bow design seismic survey vessel delivered by Dubai Drydocks in 2011 as Polarcus Selma. It is on a five year bareboat charter from Polarcus to Sovcomflot (which named it Vyacheslav Tikhonov in a ceremony in Sochi at which Vladimir Putin presided as the ship’s guardian).

Sovcomflot’s SCF Geo operation is based in St Petersburg.

To support the 3D data acquisition programme, Nordic and SCF Geo will charter and mobilize a supply ship and 10 chase vessels locally from Indian owners.

Nordic Maritime says the project has a starting date of March 15, will last three months, so is due to complete by the middle of June. The vessel is due to depart from the Port of Kakinada.

“This award from Cairn Energy for work offshore India is naturally exciting for Nordic and our partners,” says Nordic Maritime CEO Kjell Gauksheim. “We are pleased to be entrusted with it and we will perform as always to our established high standards. We believe there are more opportunities like this in the region and we are open to more contracts of this sort in future.”