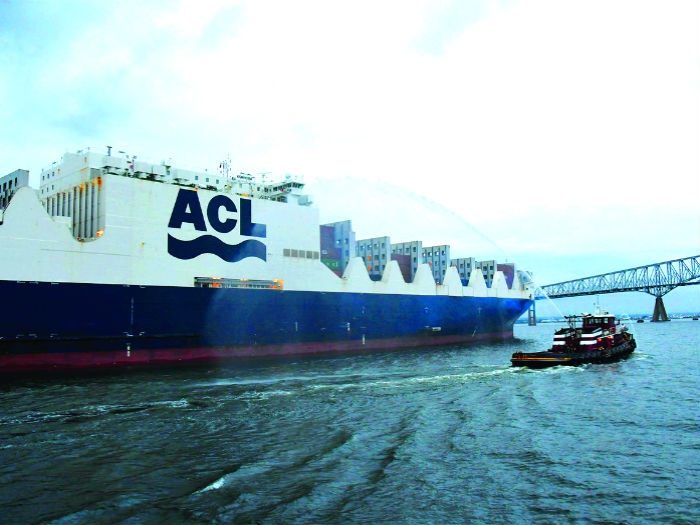 Built in China by Hudong-Zhonghua Shipbuilding (Group) Co., Ltd., the UK-flag Atlantic Star is the last of a series of five 45,000 dwt ACL G4 multipurpose Container/Roll-on/Roll-off (ConRo) ships—the largest of their type ever built.

ACL says the ships incorporate an innovative design that increases capacity without significantly changing the dimensions of the vessel. The G4s are bigger, greener and more efficient than their predecessors. Their container capacity is more than doubled at 3,800 TEUs, with 28,900 square meters of Ro-Ro space and a car capacity of 1,300+ vehicles. The Ro-Ro ramps are wider and shallower, and the Ro-Ro decks are higher (up to 7.4 meters) with fewer columns that enable much easier loading and discharge of oversized cargo. Fuel consumption per TEU has been dramatically reduced and emissions have been eliminated by exhaust gas scrubbers.

The G4 ships are very distinctive because they employ ACL’s unique cell-guides on deck. ACL ships have not lost a single container at sea in over 35 years.

The Port of Baltimore, meanwhile, is off to a strong start in 2018. The port reports it had a record-breaking month for autos in May, handling 61,058 autos and light trucks. Its previous high was 60,624 set in November 2015.

In addition, Also, May also saw the port handle 90,152 TEU (Twenty-foot Equivalent Unit) containers, the most in one month since August 2017 when it handled 88,391.