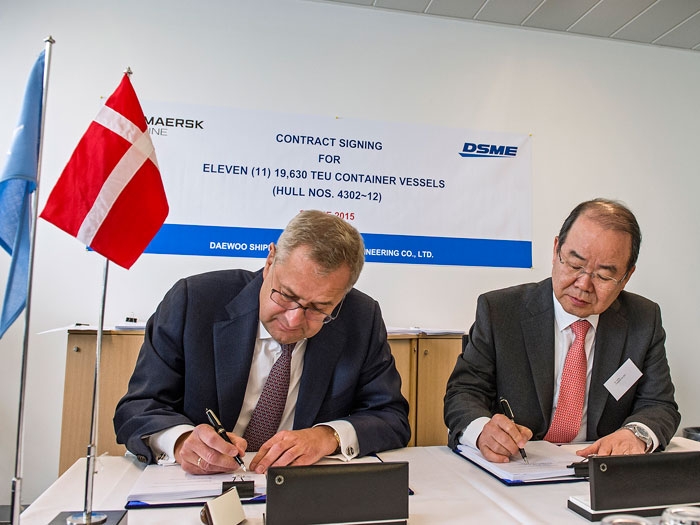 Contract was signed in Copenhagen by Mr. Sung-Leep Jung, President and CEO of DSME, and Mr, Søren Skou, CEO of Maersk Line

JUNE 2, 2015 — Maersk Line today signed a newbuilding contract with Daewoo Shipbuilding & Marine Engineering (DSME). The order is for eleven giant, second generation Triple-E container vessels with a capacity of 19,630 TEU (twenty-foot equivalent) each. It includes options for six more and has a value of $1.8 billion.

Given Maersk’s practice of stating capacity in terms of loaded capacity, rather than raw TEU, they will likely be the world’s largest containerships.

The new containerships are intended for the Asia – Europe service and will replace smaller, less efficient vessels.

The contract was signed by Mr. Sung-Leep Jung, President and CEO of DSME, and Mr. Søren Skou, CEO of Maersk Line, at a ceremony at Maersk Line’s headquarters in Copenhagen.

This is the second newbuilding order in Maersk Line’s investment program, following the seven 3,600 TEU feeder vessels announced earlier this year. Over the coming five years, Maersk Line is planning to invest $15 billion in new-buildings, retrofitting, containers and other equipment. Maersk Line says this will allow it maintain the necessary capacity to grow with global demand as well as replace less efficient tonnage.

“I am very happy with this order. These vessels will help us stay competitive in the Asia – Europe trade and will be key in our strategy to grow with the market. It is the second order this year and we expect to order more vessels, which we can add to our fleet from 2017 and onwards,” says Søren Toft, Chief Operating Officer (COO) in Maersk Line.

Maersk Line has a long and close relationship with DSME. Most recently, DSME built the pioneering Triple-E vessels. The last (out of 20) will be delivered in June 2015.

The eleven new vessels will join Maersk Line’s fleet between April 2017 and May 2018. They will sail under Danish flag.

“I am very confident placing this order with DSME. The company has a very good track record. Together we can leverage our Triple-E experiences to further improve performance, not least energy efficiency,” says Søren Toft.

DSME and Maersk Line are working on amplifying the features of the Triple-E vessels (efficiency, economy of scale and environmentally improved) in the new vessels.