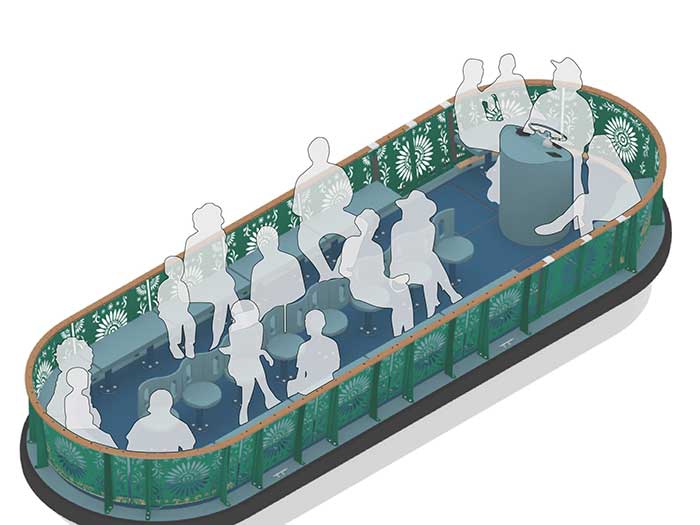 The identical river barges are 27-feet long and nine-feet wide. Each can be configured and modified in a range of floor plans to support touring, dining, commuting, entertaining, and other applications

FEBRUARY 1, 2017 — Superior, WI, based Lake Assault Boats is to build a fleet of 43 river barge boats for the City of San Antonio, TX. The contract value is $6.5 million.

The boats will become an integral component of San Antonio’s River Walk, which connects retail stores, restaurants, office buildings, and major tourist attractions throughout the city that lie along the San Antonio River.

All 43 boats will be delivered and placed into service in late 2017, in time for the city’s 2018 tricentennial celebrations.

“We are honored to be selected by the City of San Antonio to build this brand-new fleet of river barge vessels that will play a vital role in supporting the city’s unique identity and amazing recreational assets,” said Chad DuMars, Lake Assault Boats vice president of operations. “This was truly a team effort that brought to bear the resources, support, and expertise of our entire organization, including those of Lake Assault, Fraser Shipyard, and our parent company, Capstan Corporation.”

The first river barge prototype will be delivered to San Antonio in early February. After a period of on-the-water testing and final evaluation, full-scale production will begin in March 2107. Large scale deliveries will commence in mid-September with 19 craft transported on a caravan of 10 semi-trucks. The remaining 23 vessels will be delivered in mid-November.

The identical river barges are 27-feet long and nine-feet wide. Each can be configured and modified in a range of floor plans to support touring, dining, commuting, entertaining, and other applications. For example, curved bench seating at the bow and stern, and moveable seating and table configurations, give more options to passengers, and allow easy wheelchair access. The modular deck design allows for different layouts of tables, chairs and even corner booths. The flat deck and integral fold-down ramps enable easy entrance and exit. Programmable LED lighting creates a stunning visual display, and will identify each type of craft (e.g., yellow for taxi, red for touring, and blue for dinner cruises).

“The reconfigurable nature of these boats make them truly unique, accommodating everything from dinner boat cruises to water taxi services, and everyone, from commuters and morning yoga enthusiasts,” said DuMars. “We look forward to providing the city with a brand-new fleet that will serve them well during their upcoming tricentennial, and for many, many years beyond.”

The boats are designed with care for the environment and sustainability as a top priority. Each includes an innovative Torqeedo brand 10 kW outboard electric motor, with power supplied by 16 lithium batteries. Recharging the batteries is an automatic process that only requires the operator to plug the boat in to shore power.

Lake Assault Boats is a subsidiary of Capstan Corporation, which ios also the parent company of Fraser Shipyards/