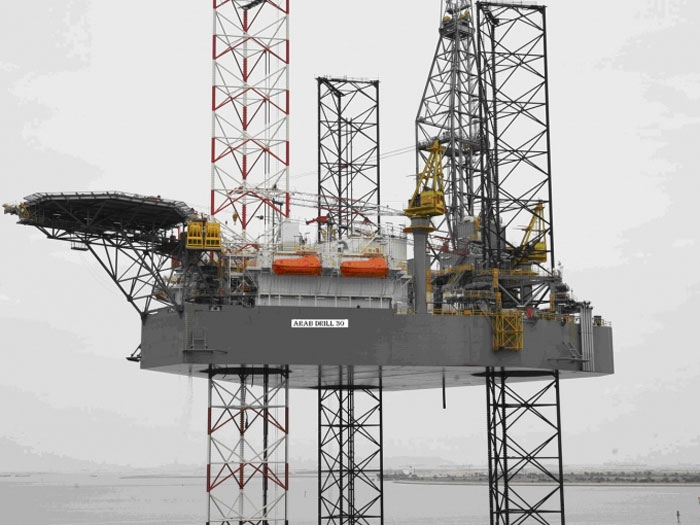 DECEMBER 27, 2013 — Singapore’s Keppel FELS shipyard is claiming the record for the largest number of rig deliveries in a year with a total of 21 newbuild offshore rigs delivered in 2013. The latest delivery, ARABDRILL 60, a KFELS B Class jack-up rig, was delivered to Arabian Drilling Company (ADC) five days ahead of schedule, on budget and with a perfect safety record.

The rig was named at a ceremony today in the presence of Mr. Mohamed Yousuf Rafie, Chairman, ADC’s Board of Directors and Mr. Lawrence Wong, Singapore’s Acting Minister for Culture, Community and Youth and Senior Minister of State for Communications and Information as the guests of honor.

“Building a KFELS B class jack-up rig involves coordination among multiple parties and over a thousand workers,” said Mr. Wong Kok Seng, Managing Director (Offshore), Keppel Offshore & Marine and Managing Director, Keppel FELS. “This year, we had some 45 projects going on at the same time. We streamlined the building process through new technology and equipment as well as having an innovative construction methodology. All our departments worked seamlessly together to set new benchmarks.

“Even though we had so many deliveries, every customer, such as ADC, is important, and we worked closely with them to understand their needs. We set out to deliver 20 and ended up delivering 21 rigs on time or ahead of schedule and safely. Our previous record was 13 in 2009. That is the Keppel standard. We always challenge ourselves to do better.”

ARABDRILL 60 will be ADC’s third jack-up rig from Keppel FELS and has been chartered to Saudi Arabia’s national oil company, Saudi Aramco. The first of the two new rigs, ARABDRILL 50, was delivered earlier this year and is already working successfully for Saudi Aramco. ADC also owns ARABDRILL 30, another KFELS B Class rig since 2009 and the rig is operating for the Al-Khafji Joint Operations (AGOC/KGOC). A strong supporter of Saudi Arabia’s offshore drilling program, Keppel FELS also previously delivered SAR 202, a KFELS Super B Class jack-up for Saudi Aramco. Three other rigs, AOD I, AOD II and AOD III delivered to Asia Offshore Drilling this year are also contracted to Saudi Aramco.

ARABDRILL 60 is the 51st KFELS B Class rig delivered since 2002, and this class of rigs makes up more than 30% of the total jack-ups completed globally since 2000. This award-winning design has a proven track record of global operations, and has established itself as the benchmark in the industry. In 2013 alone, a total of 15 KFELS B Class rigs were delivered while another 18 were ordered.

Developed by Keppel’s technology arms, Offshore Technology Development (OTD) and Bennett Offshore, the KFELS B Class jack-up design is able to operate in water depths of up to 400 feet and drill to depths of 30,000 feet which is readily upgradeable to higher performance capabilities.