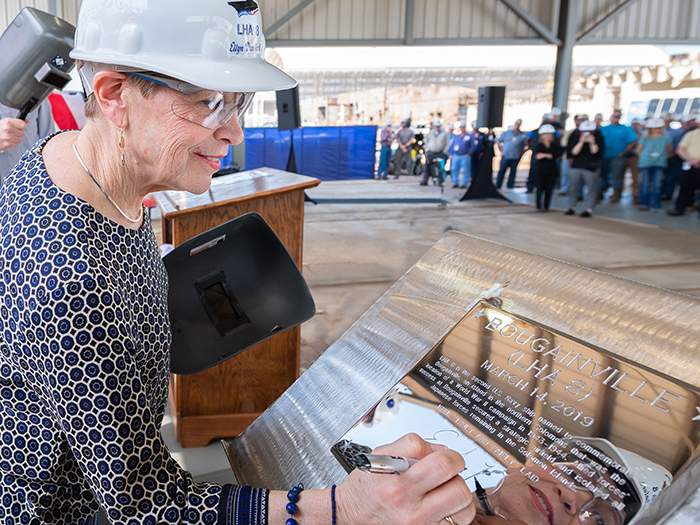 The ship’s sponsor, Ellyn Dunford, spouse of Gen. Joe Dunford, 19th chairman of the Joint Chiefs of Staff, authenticated the keel by welding her initials into the keel plate.

The ship’s sponsor, Ellyn Dunford, spouse of Gen. Joe Dunford, 19th chairman of the Joint Chiefs of Staff, authenticated the keel by welding her initials into the keel plate.

Traditionally, keel laying marks the first step in ship construction. However, with today’s advanced modular shipbuilding, the keel laying ceremony now recognizes the joining together of a ship’s components and is a major milestone in the ship’s construction. Fabrication of Bougainville began in October 2018.

“We are honored to have Ellyn Dunford with us today to commemorate this milestone,” said Tom Rivers, Amphibious Warfare Program Manager, at the Navy’s PEO Ships. “The production team has made steady progress and we look forward to bringing the next generation of amphibious capabilities to the Navy and Marine Corps warfighters.”

The well deck will give the U.S. Marine Corps the ability to house and launch two landing craft air cushion (LCAC) hovercraft or one landing craft utility (LCU) as needed during maritime missions. Other additions to Bougainville include a larger flight deck configured for Joint Strike Fighter and Osprey V-22 aircraft, which can be used for surface and aviation assaults. The additional area on the flight deck comes in part from a smaller deck house and an additional sponson.