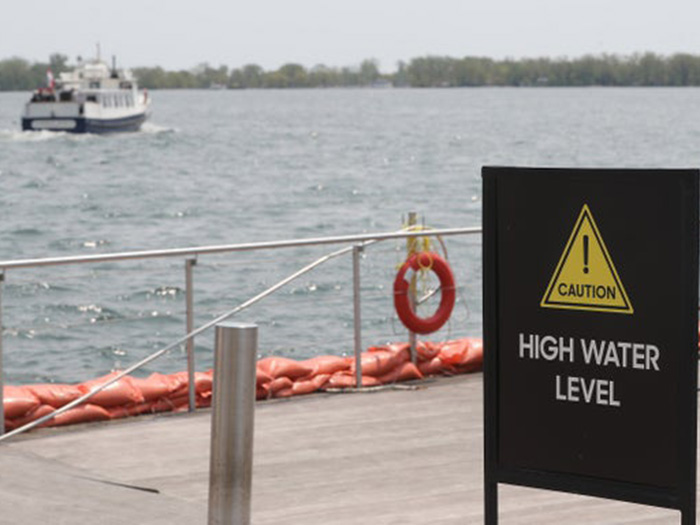 The Saint Lawrence Seaway Development Corporation reports that, this summer, the water levels on Lake Ontario and the St. Lawrence River again rose above the record high for this time of year that was set in 1952.

Due to record inflows from Lake Erie and persistent precipitation around Lake Ontario in May and June, water levels on Lake Erie, Lake Ontario, and in the lower St. Lawrence River reached record levels.

Widespread flooding occurred in Montreal and along the shores of Lake Ontario.

As in 2017 when a similar weather situation faced the area, in response to these extraordinary water and weather events, the International Lake Ontario-St. Lawrence River Board (Board) increased outflows to provide relief to the shoreline property owners. On June 13, the Board increased the outflow rate to 10,400 cubic meters per second (cms), the highest rate that still allows for safe commercial navigation.

It has been necessary for the U.S. and Canadian Seaway Corporations to implement a number of significant operational measures and transit requirements for ships in order to mitigate the impacts of the high water velocities and ensure continued safe navigation in the St. Lawrence Seaway.

Operational safety measures that have been instituted include: speed controls in sections of the St. Lawrence River; a prohibition on meeting or passing of vessels during the high flow conditions in certain areas; and directions to operate at the lowest safe speeds to minimize vessel wakes, particularly when navigating close to shore.

In addition, a tug was positioned at the Canadian Iroquois Lock to assist vessels entering the lock. Although vessel transit times have increased due to these mitigation measures, current navigation conditions are safe with the measures that are in place. These are the same mitigation measures that were implemented in 2017 during the high water level/outflow conditions.

In 1993, when outflows were increased above 10,400 cms briefly, records indicate there was significant downstream erosion and other impacts that occurred at that outflow rate.

While the water levels are now receding, the Seaway Corporations continue to work closely with the Board and the International Joint Commission to determine the most appropriate and effective approach going forward.

It is apparent, they say, that the extensive nature of the high water challenges experienced over the past few years point to a need for greater resilience among all stakeholders.