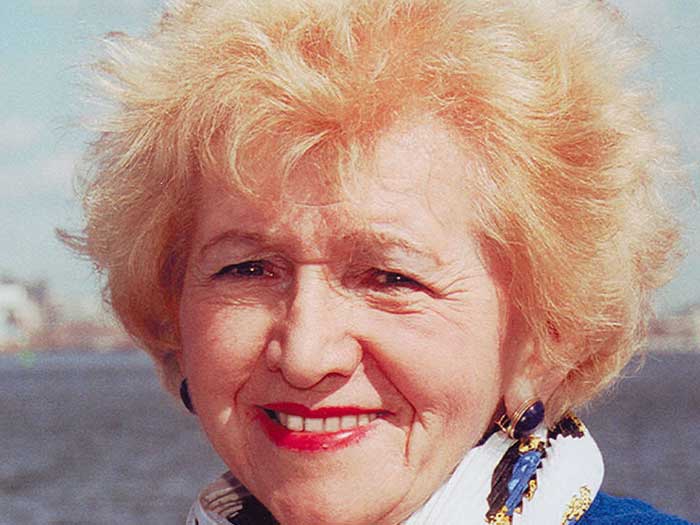 AUGUST 8, 2016 — U.S. maritime industry icon Helen Delich Bentley, died Saturday at home in Lutherville, MD. She was 92 and worked, juggling two cell phones from her sick bed, almost until the day she passed away at her home.

A former Federal Maritime Commission chairman and five-term U. S. Congressman, throughout her 70-plus year career, she tirelessly promoted two major issues — the advancement of America’s industrial/manufacturing base and its maritime community.

Born in Ruth, Nevada, at high school she worked on a local weekly newspaper and received scholarships to study journalism at the University of Missouri, graduating in 1944.

On graduation, Miss Delich worked for small-town newspapers in Fort Wayne, Indiana and Lewiston, Idaho, until joining the Baltimore Sun in 1945 and being dispatched to the waterfront to revive coverage of the port, a beat the newspaper had neglected during World War II. She had never seen a ship, or the ocean. It was a tough, male-dominated environment, but she loved it.

She developed a maritime and waterfront news niche. She became a widely respected maritime reporter, dealing with people from longshoremen to politicians.

In 1969, then President Richard Nixon appointed Mrs. Bentley, who had married William (Bill Bentley) ten years earlier, as Chairman of the Federal Maritime Commission. She became the fourth-highest ranking woman in the history of America’s federal government, the highest ranking woman of Nixon’s administration, the first woman to serve in a key governmental position in the maritime field and the first woman appointed by a President to head a regulatory agency.

She was a principal architect of the Nixon Administration’s 1970 Merchant Marine Act, which established a level of government support for building tankers and bulk carriers in U.S. shipyards.Bentley used her chairmanship as a platform to strengthen American industry, and then continued the fight in Congress, where she became a leader against the transfer of jobs overseas.

Chairman Bentley stayed in the FMC position for a year after Nixon’s resignation, before returning to Baltimore to determine her next life role.

In 1984, she was elected to serve the first of five terms, representing Maryland’s 2nd Congressional District. While in Congress, she sat on the Appropriations, Budget, Public Works & Transportation and Merchant Marine & Fisheries Committees, in addition to the Steel, Art, Northeast, Human Rights and Trade & Tourism Caucuses

In 2004, she was honored when the then Governor renamed the port The Helen Delich Bentley Port of Baltimore.

During the week she died she still had multiple telephones perched on her bed speaking to her clients and making her usual contacts.A memorial will be held in Baltimore in October.

Read her obituary in the Baltimore Sun HERE