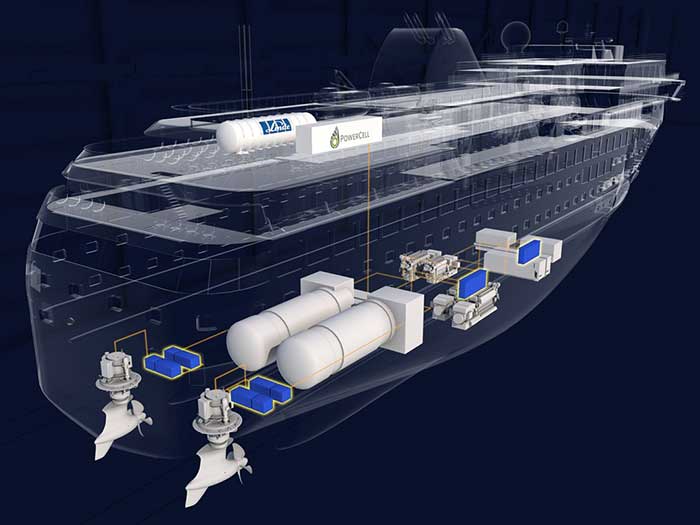 Norway’s Havyard Group has released more details of the 3.2 MW maritime fuel cell solution it has under development for large ships

If large vessels are to sail zero emission at high speed over long distances, battery solutions do not provide enough energy, say Havyard, which sees fuel cells running on liquid hydrogen as a solution.

Havyard Group and its Havyard Design & Solutions and Norwegian Electric Systems (NES) units have been working on what Havyard calls the FreeCO2ast project for some time.

Now, says Havyard, the first phase of project has been completed and it is now entering the approval stage for the hydrogen system. For this, Havyard is partnering with with Linde Engineering as supplier of the cryogenic fuel tanks and (as we reported earlier) PowerCell Sweden AB as supplier of the fuel cells.

The project manager for the FreeCO2ast project, Kristian Osnes, says Linde is a significant player in the market for designing and manufacturing equipment for cryogenic gases.

“We believe they are the right partner for finding solutions that will ensure safe storage and control barriers for cryogenic hydrogen on board ships,” he says. “The regulations for these solutions have not yet been developed, and we are pleased to have Linde on-board when entering the approval process, which we expect to be very challenging.”

The agreement entails that the Havyard companies, together with PowerCell and Linde, will design a hydrogen solution and take the first step towards certification.

This solution will be offered to Havila Kystruten for retrofitting.

“The system we are developing is designed in modules and can be installed both in newbuilds and retrofitted in existing ships,” says Steinvik. “In this way, we will contribute to the development of large-scale vessels that can sail emission free over long distances, or significant emission cuts from vessels that use hybrid propulsion systems.”