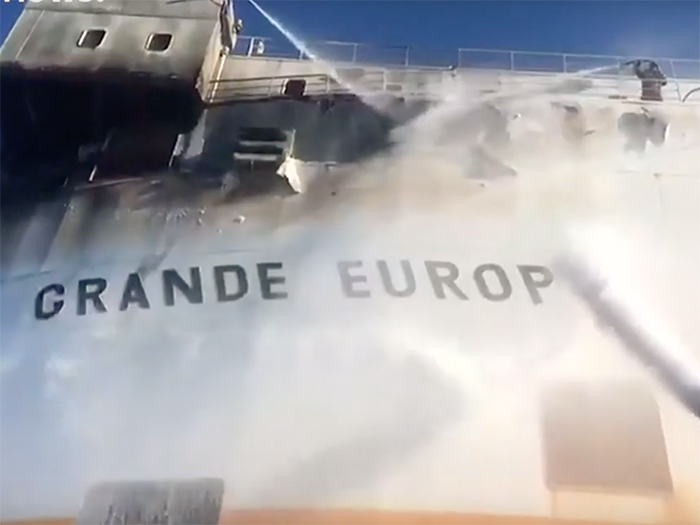 The Naples, Italy, headquartered Grimaldi Group reports that a fire that broke out on board its RO/RO vessel Grande Europa during the night of the 15 May, while she was sailing about 25 miles from Palma de Mallorca.

Built in 1998, the Italian-flagged vessel had left the port of Salerno in the afternoon of May 13, bound to the Spanish port of Valencia. On board there were 25 crew members and a cargo consisting of 1,687 vehicles (cars, vans, trucks, excavators, etc), the vast majority of which were brand new, and 49 containers containing mainly food products.

The alarm was given by the crew at 00:45 a.m., after a fire broke out on deck 3 that was completely extinguished by the crew itself after about 45 minutes. At 04:00 a.m., a second fire was located on deck 8, which spread to deck 9. Again the crew promptly intervened with the firefighting equipment on board.

The Master of the vessel promptly informed the competent Italian and Spanish authorities as well as the headquarters of the Grimaldi Group in Naples of the two fires.

For precautionary reasons, at 09:30 a.m on May 15, fifteen crew members were evacuated by a Spanish Coast Guard helicopter that transfered them to the Spanish Navy ship Martin Posadillo.

The firefighting operations continued also with aid a Spanish firefighting tug. At 02:00 p.m. the fire was finally put out and the Grande Europa was assisted by a tug that towed it to the port of Palma de Mallorca, while she still had fully operational engines. The vessel arrived in Palma at 06.00 a.m., this morning.

Preliminary investigations by the Grimaldi Group suggest that the two fires started from two different new vehicles stowed on board, and then spread to the other nearby units.

Following this latest case of a fire that breaking out on vehicles transported by cargo vessels, the Grimaldi Group is launching an appeal for more more stringent controls and regulations on both rolling cargo units and containers.

In particular, Grimaldi Group wants to see more controls on car batteries, which often cause short-circuits on board vessels, as well as in port terminals. It is also calls for the total prohibition of the presence of personal effects in second-hand vehicles carried on RO/RO vessels.

Finally, with regard to containers, IMO is urged to make mandatory the certification by a classification society of the correct stuffing of containers carrying dangerous goods.