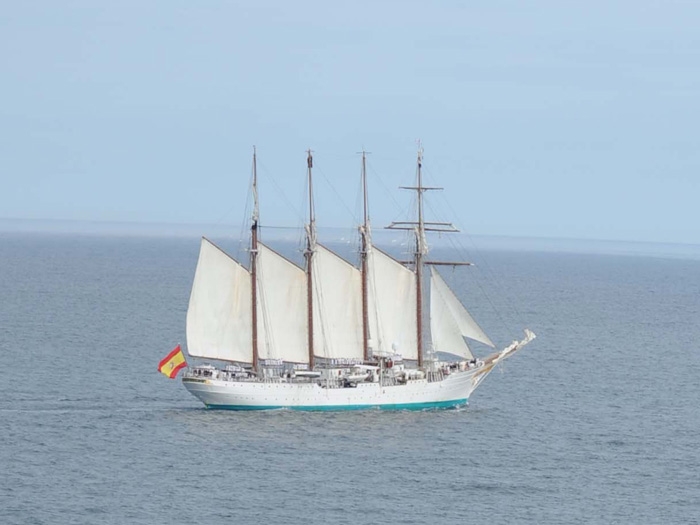 JANUARY 25, 2016 — Two alleged drug traffickers were arrested in Colombia last week pursuant to a U.S. extradition warrant. They are alleged to have conspired to smuggle multi-kilogram quantities of heroin and cocaine to New York City aboard the Royal Spanish Navy training vessel, the Juan Sebastian de Elcano, between April and May of 2014.

According to the statement released by the Special Narcotics Prosecutor, a long-term wiretap investigation revealed that Hoayeck and Siado-Alvarez oversaw a major international drug operation from their base in Cartagena, Colombia. As part of the conspiracy, the pair allegedly supplied narcotics to New York City-based traffickers. Additionally, they worked with the New York City-based traffickers to sell kilogram quantities of heroin and cocaine and sought payment for the narcotics. The defendants communicated with one another and with the New York City-based narcotics traffickers by cellular phones using coded, cryptic language.

Charges in the indictment center on a shipment of eight kilograms of narcotics (over 17 lb), including four kilograms of heroin and four kilograms of cocaine, delivered to New York City by Spanish midshipmen in training to become officers of the Spanish Navy aboard the Juan Sebastian de Elcano. The ship was on a six-month voyage that originated in Cadiz, Spain and included stops in France, Italy and Morocco, before crossing the Atlantic Ocean for stops in Cartagena, Colombia, the Dominican Republic and New York City.

The wiretap investigation, which was pursued by Colombian authorities, revealed that Hoayeck and Siado-Alvarez agreed to pay two midshipmen a total of $32,000 to hide the narcotics aboard the Juan Sebastian de Elcano and deliver it to the New York City-based traffickers.

The midshipmen received the narcotics while the famed tall ship was docked in Cartagena on or about April 16, 2014.

On arriving in the Port of New York, the vessel docked on Manhattan’s West Side near the U.S.S. Intrepid. On May 14, 2014, the ship’s last full day in New York City, the midshipmen allegedly met with the local traffickers and accompanied them to a residence in the Bronx, New York in order to deliver the narcotics.

On May 16, 2014, members of DEA’s New York Drug Enforcement Task Force Group T-42 – comprised of DEA special agents, New York City Police Department detectives and New York State Police investigators – followed two vehicles linked to the New York City-based drug trafficking organization as they travelled north on Interstate 95 towards Hartford, CT, to deliver the heroin delivered by the Spaniards (as well as additional narcotics). With assistance from the DEA’s New Haven District Office and the Hartford Resident Office, agents and officers tracked the vehicles to a residential building. The four kilograms of heroin and additional multi-kilogram quantities of narcotics, drug paraphernalia, and cash were seized at the location.

Also on May 16, 2014, the NYDETF also recovered the four kilograms of cocaine from a vehicle parked outside of the Bronx stash location. Additional narcotics, weapons, and narcotics paraphernalia were also subsequently recovered at locations in the Bronx associated with this investigation.

After leaving New York, the Juan Sebastian de Elcano traveled to Ireland, Norway, Germany, and finally back to its home port in Cadiz, Spain. Officers with the Spanish Civil Guard conducted a thorough search of the ship and recovered 127 kilograms of cocaine (nearly 280 lb) in a storeroom for reserve sails. This seizure is the subject of an ongoing investigation. Hoayeck and Siado-Alvarez have not been charged in connection with this shipment of narcotics.