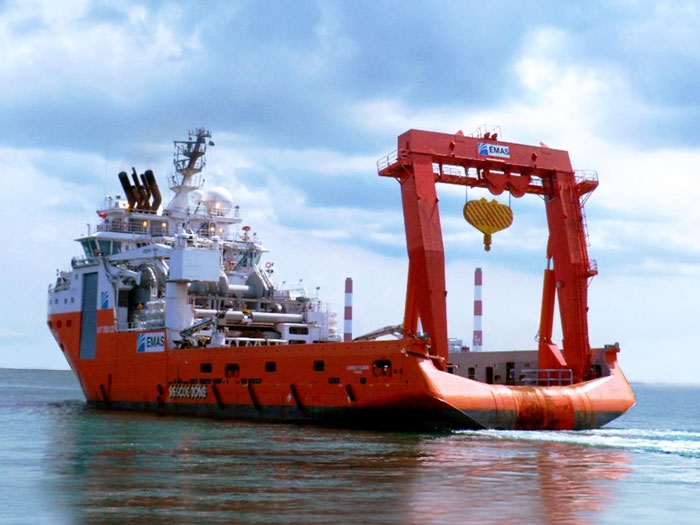 On completion of the transaction, the enlarged EOC Group will be one of the largest offshore support operators in Asia Pacific by asset value, managing an offshore services platform comprising over US$1 billion in offshore support assets. Its fleet of 50 offshore vessels is among the youngest in the region. Ezra says the fleet has a combined bollard pull of almost 4,000 tons, more than 37,000 dead weight tonnes (dwt) and a total of almost 350,000 BHP, making it one of the strongest and most powerful in the region, with capabilities to operate globally at ultra-deep water depths.

“By bringing together EMAS Marine and EOC, Ezra has created an offshore solutions provider in the region that is ahead of its peers in terms of fleet capabilities,” said Mr. Lionel Lee, Ezra’s Group CEO and Managing Director.

“This move allows us to capitalize on investors’ growing interest for exposure in the different segments of the offshore oil and gas sector, and at the same time, meet increasing demand for newer offshore support vessels (OSVs) with large deck areas, accommodation capacity, bollard pull, and dynamic positioning capabilities among our clients.

“By combining our established platform of resources, talent and technical capabilities, together with EOC’s strategy to expand into the offshore accommodation space, we believe it is now time to unlock value and consolidate our business units.”.

Mr. Lee Kian Soo, Ezra’s Group Founder, Non-Executive and Non-Independent Director, said: “This is a significant milestone for us. When we started in 1992, we were a simple ship operator. Seven years later, we obtained our first vessel. Today, I am pleased to present to the market this new platform which manages 50 vessels. Through the years, we have gained international recognition for our strong execution capabilities and operational flexibility. I believe that with our enlarged platform, we can capture a greater market share and serve our clients better.”

Ezra says that with a highly experienced and committed independent management team helming the enlarged EOC Group, Ezra’s management will also be able to focus on developing the fast-growing Subsea Services business, which has become the Group’s main revenue generator.

Ezra and EOC have agreed on a consideration of US$520 million, comprising US$150 million in cash and US$370 million by the issuance of approximately 280.1 million new EOC shares to Ezra based on the issue price of NOK 8.18 per new share.

The consideration was arrived at on a willing-buyer, willing-seller basis and takes into account, among others, the track record and market position of EMAS Marine and business rationale for the enlarged entity. In EOC’s announcement, Fearnley Securities AS, the independent financial adviser to the board of directors of EOC, has rendered a preliminary conditional opinion that the terms of the proposed consolidation are fair to the EOC shareholders.
DBS Bank Ltd’s Strategic Advisory unit has been appointed as Ezra’s financial adviser in relation to the proposed consolidation exercise.

In connection with the proposed consolidation, EOC is considering a potential secondary listing and quotation of all the shares of EOC on the Main Board of the Singapore Exchange Securities Trading Limited (SGX-ST). Further, it is contemplated that Ezra will undertake a secondary sale of shares of up to US$20 million in the Norwegian market directed at EOC’s existing shareholders in the Norwegian Central Securities Depository (VPS), at the same price as the proposed offering.

The proposed secondary listing is led by DBS Bank Ltd, one of Asia’s largest banks. DNB Bank ASA, Norway’s largest financial services group, has been appointed as financial adviser to EOC for the transaction.

The proposed secondary listing will allow EOC to leverage the EMAS branding in Asia for greater access to competitive sources of debt and equity and is expected to improve the overall trading liquidity in EOC shares.