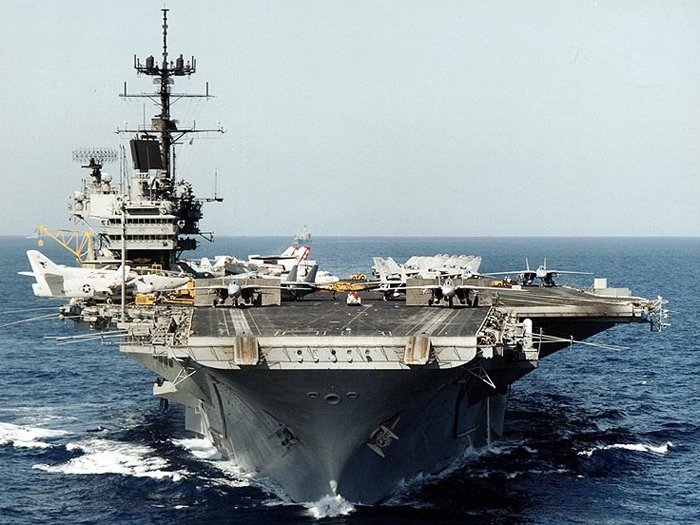 MAY 13, 2014 —  The Navy is to pay ESCO Marine, Brownsville, Texas, just one penny for the dismantling and recycling of the decommissioned aircraft carrier Saratoga (CV 60). The $0.01 price reflects the net price proposed by ESCO Marine, which considered the estimated proceeds from the sale of the scrap metal to be generated from dismantling.

The Navy notes that “this is not a sales contract, it is a procurement contract. $0.01 is the lowest price the Navy could possibly have paid the contractor for the towing and dismantling of ex-Saratoga. The Navy continues to own the ship during the dismantling process. The contractor takes ownership of the scrap metal as it is produced and sells the scrap to offset its costs of operations.”

This is the second of three contracts for conventional aircraft carrier dismantling. All Star Metals of Brownsville was awarded the first contract on Oct. 22, 2013 which included the towing and dismantling of ex-USS Forrestal (AVT 59). A third contract award is pending to International Shipbreaking Ltd. of Brownsville to include the towing and dismantling of ex-USS Constellation (CV 64) once that company receives its facility security clearance.

After the initial award of one carrier to each successful offeror, the Navy has the capability of scrapping additional conventionally-powered aircraft carriers over a five-year period under delivery orders competed between the three contractors.

ESCO Marine will now develop its final tow plan for the Navy’s approval for the tow of Saratoga from its current berth at the Naval Station Newport, Rhode Island, to ESCO Marine’s facility in Brownsville. The ship is expected to depart Newport this summer. Navy civilian personnel will be on site full time to monitor the contractor’s performance during dismantling of the ship.

USS Saratoga was decommissioned Sept. 30, 1994, after over 38 years of service. For 12 years, until April 2010, the ship was available for donation to a state or non-profit organization for public display as a museum or memorial. However, no viable applications were received and the vessel was redesignated for disposal.