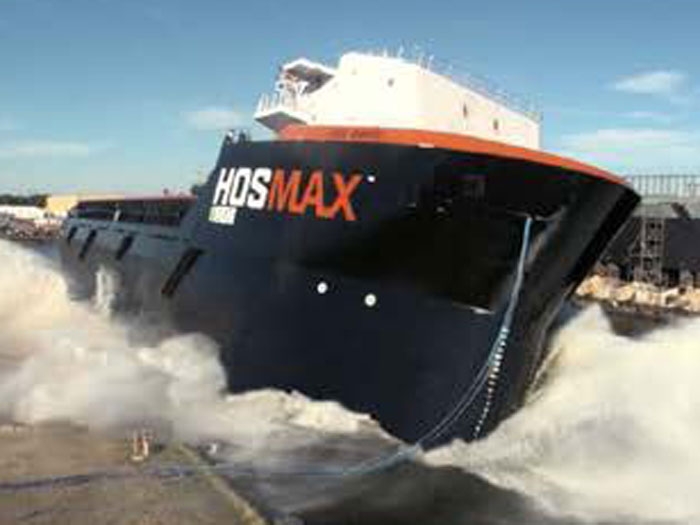 Hornbeck Director of Engineering and Project Management Mr. Bill Krewsky spoke about the long term commitment, partnership and future of Hornbeck and Eastern and praised the shipbuilder’s quality of workmanship, the ongoing vessel deliveries and the excellent performance of the Eastern-built HOS Red Dawn, and the HOS Red Rock, both now on charter working in the Gulf of Mexico.

Others from Horneck attending the launch included Scott Siberski, Manager of Projects, four Hornbeck Operations personnel and vessel officers from the Hornbeck team.

Captain Steve Powell will be taking the vessel to sea as Master once she delivers early next year. His wife Susan had the honors of christening the vessel; they were accompanied by their two children, Mitchell and Linda. Deacon Timothy Warner of Saint John’s Catholic Church, Panama City, performed the blessing of the vessel.

The HOS Bayou is the first of six vessel Eastern vessels designated as the HOSMAX 310 series by Hornbeck Offshore and is a Diesel-Electric powered, twin Z-drive propelled OSV.

These vessels are capable of a maximum speed of 14 knots with a cruising speed of 12 knots. The fully integrated bridge is arranged for increased visibility and features the latest technology in navigation, communication equipment.

The HOSMAX 310 Offshore Support Vessels offer a clear deck area of  11,137 sq.ft and have the following capacities:

STX Canada Marine and Eastern Shipbuilding provided the design for these vessels based on the very successful and proven Eastern Shipbuilding “Tiger Shark Class” Series. Eight other offshore supply vessels in this series have been delivered to Eastern’s clients and have already proven themselves in worldwide operations.

Eastern Shipbuilding Group is currently under contract constructing a total of sixteen vessels of similar size and complexity for customers in the United States and in Brazil.