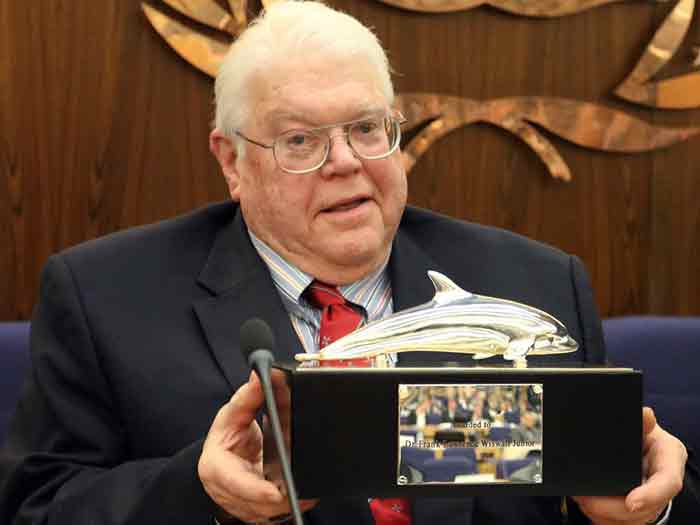 Prize was awarded in a ceremony at IMO Headquarters

DECEMBER 7, 2016 — Dr. Frank Lawrence Wiswall Junior, former Chair of the IMO Legal Committee and Vice President (Honoris Causa) of the Comité Maritime International (CMI), has received the prestigious International Maritime Prize for 2015 for his contribution to the work of IMO over many years.

Presenting the prize in a ceremony at IMO Headquarters on Monday, IMO Secretary-General Kitack Lim highlighted Dr. Wiswall’s dedication and leadership in the field of international maritime law over several decades, making an invaluable contribution to the goals and purpose of IMO.

“Dr. Wiswall’s contribution to IMO’s goals has been vast. In helping to provide the legal backbone for a regulatory regime that covers just about every aspect of ship design, construction and operation, and related issues like liability and compensation, wreck removal and ship recycling – he has played his part in our common goal of making shipping safe, secure, efficient and clean,” Mr. Lim said.

Dr. Wiswall acted as Vice Chair and Chair of IMO’s Legal Committee in the 1970s and 1980s; worked as a lecturer and Governing Board Member of the IMO International Maritime Law Institute, IMLI, and served as Vice-President of the Comité Maritime International.

The IMO Council decided to award the Prize to Dr. Wiswall at its June session, noting Dr. Wiswall’s personal contribution to the work of IMO, leading IMO’s Legal Committee as it developed a number of key international treaties and holding important roles at various international IMO legal and diplomatic conferences.

As a lecturer at IMLI in Malta and as a Member of its Governing Board from 1992 to the present, Dr. Wiswall has also made a significant contribution to the training of lawyers from around the world.

In nominating his candidature for the International Maritime Prize, the CMI said Dr. Wiswall had contributed greatly to the establishment of the uniformity of maritime law during his long and distinguished career as a practising maritime lawyer, academic and Vice-President of the CMI.

Frank Wiswall is a resident of Castine, Maine, United States. He was born in Albany, New York, and raised in Maine. He obtained a Bachelor of Arts degree at Colby College, a Doctor of Law at Cornell University and a Doctor of Philosophy at Clare College, Cambridge University. He was admitted to the Bar in the State of Maine in 1965 and the Supreme Court of the United States in 1968.

Dr. Wiswall worked with New York admiralty and law firm Burlingham Underwood (1967-1973) before taking on the role as Admiralty Counsel, Bureau of Maritime Affairs for the Republic of Liberia (1973-1988). He worked as Maritime Counsel at the International Bank in Washington DC and has been in private practice and consultation on admiralty and maritime international law since 1985.

During these periods, the Legal Committee achieved a great deal of work, including the drafting of articles and conventions in relation to wreck removal; limitation of liability for maritime claims; legal aspects of a draft international convention on search and rescue; extension of the 1969 International Convention on Civil Liability for Oil Pollution Damage (CLC) to oils not covered by that Convention; review of limits in the 1969 CLC and 1971 Fund Convention; the draft International Convention on Liability and Compensation for Damage in Connection with the Carriage of Hazardous and Noxious Substances by Sea; consideration of salvage and the revision of the 1910 Salvage Convention; consideration of work in respect of maritime liens and mortgages.

Shortly after his tenure as Chair of the Legal Committee, Dr. Wiswall was asked by the then IMO Secretary-General to review a draft syllabus for the embryonic International Maritime Law Institute (IMLI) in Malta. Dr. Wiswall instantly became a strong believer in IMLI’s purpose as a capacity-building and training institute, and began teaching at IMLI in 1990, visiting once or twice per year. He has lectured on a variety of topics including maritime legal history, maritime legislation drafting, law of maritime safety and the law of marine collisions.

IMLI conferred on Dr. Wiswall the Degree of Honorary Professor of International Maritime Law in 1999, in recognition of his long service to the harmonization, progressive development and codification of international maritime law.

Dr. Wiswall was also a visiting professor at the World Maritime University (WMU) in Malmö, Sweden, from 1986 to 2003.

Dr. Wiswall has made an extensive contribution to the work of the Comité Maritime International (CMI), which has consultative status at IMO. He was made a Titulary member of the CMI (1980); Executive Councillor (1989-1997); Vice President (1997-2005) and Chair of the CMI Constitutional Committee (since 1992).

Dr. Wiswall is a member of various law associations and societies and has published a number of legal books, including The Development of Admiralty Jurisdiction and Practice Since 1800 (1970), and numerous papers and articles.