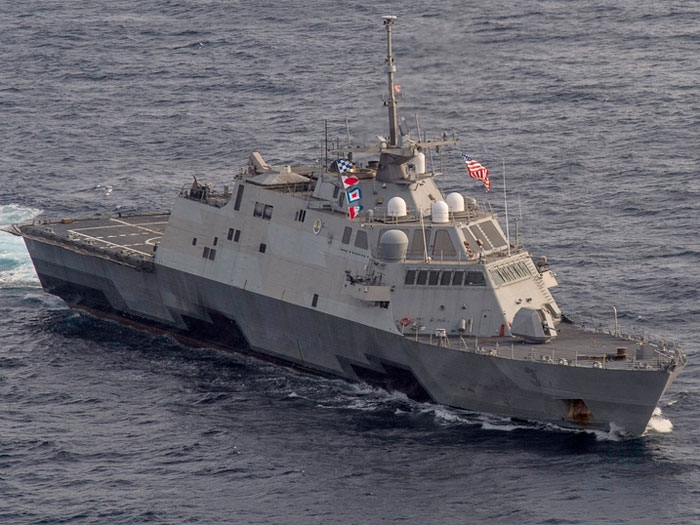 APRIL 14, 2016 – The U.S.Pacific Fleet said yesterday that the Freedom Class littoral combat ship USS Fort Worth (LCS 3) will make preparations to get underway from Singapore on its own power and transit to San Diego this summer.

Fort Worth experienced an engineering casualty to the ship’s combining gears January in Singapore that will require an extensive repair period.

At the time of the casualty U.S. Pacific Fleet said that, “based on initial indications, the casualty occurred due to an apparent failure to follow procedures during an operational test of the port and starboard main propulsion diesel engines.

The Fort Worth’s commanding officer, Cmdr. Michael L. Atwell was subsequently relieved  due to loss of confidence in his ability to command.”

The loss of confidence followed an investigation into the facts and circumstances surrounding the engineering casualty. U.S. Pacific Fleet said that,although the investigation was still under review “sufficient findings of facts emerged during the investigation to warrant the relief of the commanding officer.”

The ship will use its gas turbine engines to transit to San Diego from its current location. The transit  is expected to take about six weeks with several underway replenishments and planned fueling stops along the way.

Repairs will be conducted during Fort Worth’s previously scheduled selected restricted availability with docking (SRA(d)) maintenance period, reducing the overall cost to the Navy. It has yet to be determined whether the SRA(d) duration will be extended due to the combining gear repair work.

As Fort Worth demonstrated through continuous operations in 2015, littoral combat ships provide an important capability in the Indo-Asia-Pacific region and planning continues for future LCS deployments, says the Navy.