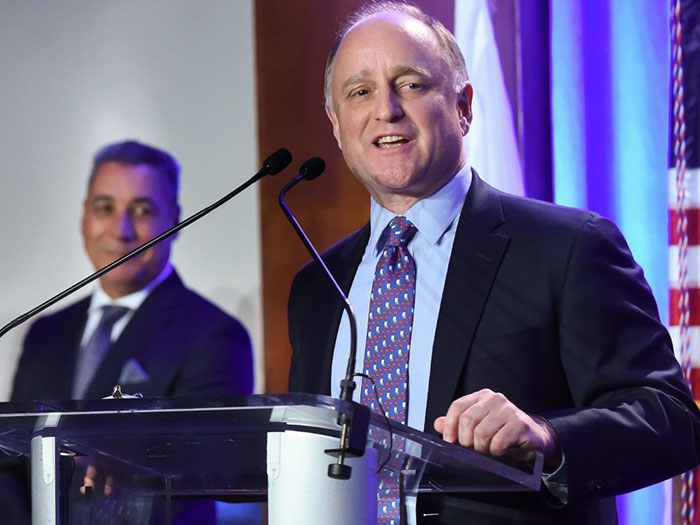 Award was accepted on the behalf of company's Puerto Rico employees by Tom Crowley, chairman and CEO (right) and Jose Nazario, director of finance in San Juan

JUNE 18, 2018 — Crowley Maritime Corporation recently received a Humanitarian Award from Seamen’s Church Institute (SCI) for its relief efforts in Puerto Rico following Hurricane Maria. The award, which was accepted on the behalf of the company’s Puerto Rico employees by Tom Crowley, chairman and CEO, and Jose Nazario, director of finance in San Juan, was presented during the 41st annual Silver Bell Awards Dinner, which is attended by over 700 members from the shipping industry and associated companies.

In the aftermath of the September storm, Crowley’s liner services and logistics teams, working with government and commercial customers, played an integral role in the recovery. The company’s more than 300 union and administrative employees resumed services and reopened company facilities, including a warehouse and the Isla Grande terminal, just two days after the storm passed, and began discharging government and commercial cargo from vessels to support relief efforts on the island within hours of the U.S. Coast Guard reopening the harbor in San Juan.

Crowley has provided a constant transportation and logistics pipeline to the island since the storm made landfall – unloading more than 200 vessels in a 182-day period.

“We are as humbled by this recognition as we are grateful for the extraordinary work of our teams in San Juan, Jacksonville and in other parts of the country following Maria,” said Tom Crowley. “Many of our employees have friends and family that were directly affected by the disaster and many are residents of Puerto Rico themselves. Their tireless commitment and focus on finding solutions that make an impact continues to be truly impressive and deserving of our respect and appreciation. As a company, we have long since been committed to the people and businesses of Puerto Rico, through the good times and the challenging ones, this response is an extension of that.” Silver Bell_Nazario2018

Nazario also spoke passionately about the award saying, “The memories of Wednesday, September 20, will live with me the rest of my life. The next day, after confirming that my family was OK, I went to the terminal to assess the damages and I found something incredible. Ninety-six percent of our employees showed up to work. You may ask why did people do that? And there is only one word that describes that – commitment. Commitment to Crowley and commitment to Puerto Rico because they knew that in those Crowley containers was the food, ice, water, fuel, construction material for the recovery of the island.”

Trailer Bridge and Tote Maritime were also recognized with the award for their efforts during the recovery.

Founded in 1834 and affiliated with the Episcopal Church, though nondenominational in terms of its trustees, staff and service to mariners, the Seamen’s Church Institute of New York & New Jersey (SCI) is the largest, most comprehensive mariners’ service agency in North America. Annually, its chaplains visit thousands of vessels in the Port of New York and New Jersey and along 2,200 miles of America’s inland waterways extending into the Gulf of Mexico. SCI’s maritime education facilities provide navigational training to nearly 1,600 mariners each year through simulator-based facilities located in Houston, TX and Paducah, KY. The Institute and its maritime attorneys are recognized as leading advocates for merchant mariners.