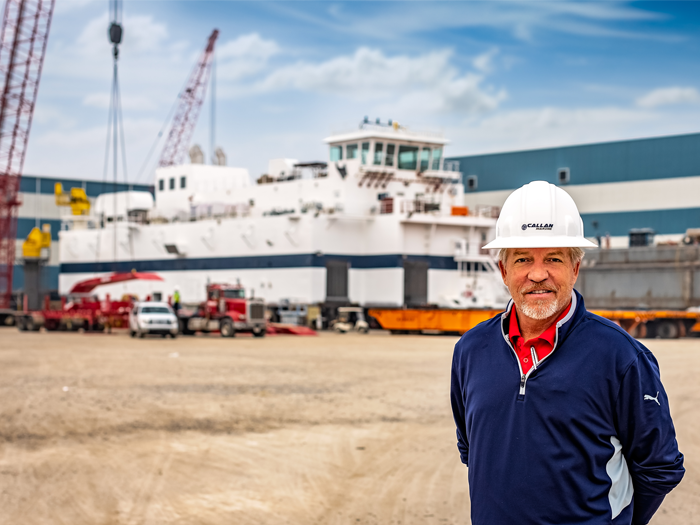 Without dredging, many rivers, harbors, and ports would be impassable to towboats, cargo ships and passenger vessels. Periodic maintenance dredging and channel deepening projects are essential to accommodate these commercial vessels. And as Maxie McGuire, president of Callan Marine, a full-service dredge contractor based in Galveston, Texas, alludes to further down in this story, consumer product prices are lower when ships can transport cargoes on waterways and directly to ports and terminals.

To get more acquainted with what McGuire and Callan Marine have going on this year, we talked to McGuire, who joined the company after working for the U.S. Army Corps of Engineers in a position specifically designed for veterans. McGuire had served five years in the U.S. Air Force and served a tour in Desert Storm prior to joining the Corps.

While at the Corps, McGuire worked on civil construction projects as an inspector, where he was first introduced to dredging. Five years later, McGuire moved into the private sector as a project manager with the Bean companies. “I have progressed through the ranks to my current position with Callan Marine ever since,” he says. Here’s more …

Marine Log (ML): Why are we seeing such a surge in dredge orders in past couple of years?

Maxie McGuire (MM): The market is busy and we’ve been fortunate at Callan Marine to experience a good economy in a great market along the Texas and Louisiana coast.

ML: What percentage of your work comes from the Corps?

MM: We are very diverse at Callan Marine, with both a large and small dredge fleet. Approximately 90% of our projects are private market, but a large portion of our revenue is from the Corps of

Engineers, where the large dredges perform that work. Of the private market projects, most of them involve stevedoring customers, the oil & gas sector, and various other products in the market.

ML: What factors into your selection of shipyards?

MM: We lean towards experience with dredge constructors, but put a lot of stock into the schedule and the character and culture of the shipyard as successful projects are one part price and schedule and one part working relationship. If we are aligned in goals, success is the result.

ML: Any thoughts of getting into offshore wind farm work?

Callan Marine was founded on dredging and is heavily involved in the dredging community but has grown into a turnkey marine contractor. We know there will be dredging services needed in the offshore wind farm industry and will assess our opportunities for growth and expansion into the markets that align with our future goals.

Everything that would feed an offshore platform is buried beneath the seafloor, and dredgers would excavate trenches that would need backfilled.

ML: Finally, what’s to come in 2021 for Callan Marine? Any new projects in the works?

MM: Callan Marine will be delivering our fifth fleet dredge, General Bradley, in Q2 or Q3 of this year. General Bradley is positioned to be a premier ship channel dredger.

It’s not quite as large and not offshore capable, but it will be perfect for navigation channels, including the Houston Ship Channel, Savannah River, the Mississippi River, and others.

The dredge is being built by Hagler Systems at the Halimar Shipyard in Morgan City, La., with the main engineering of the dredge design and supplying of key dredge components by APT Offshore BV.

The General Bradley is diesel-electric driven and will have three ABC 12DZC engines installed with a total of 9,260 hp.

“The General Bradley is a demonstration of our commitment to capital improvement projects along the Gulf Coast region. It will transcend our ‘middle market’ offering and truly be a difference-maker in large river and ship channel dredging.

A lot of channel users are familiar with dredges as they maintain the depths and widths of the waterways for all of the users. You can drive up and down the highways and see potholes on the roads that need repaired. It’s similar to the rivers. As dredgers, we maintain waterways highways if you will. Proper depths and widths will help maximize cargo.

For the remainder of 2021, stay tuned! The excitement is not over!

Whether it’s been winning dredge contracts, building new dredgers, or promoting people within the company to reflect its growth, Callan Marine in Galveston, Texas, has been in the news frequently over the last couple of years.

The General MacArthur is 290 feet long, and with its 180-foot idler barge attached, the dredge has a maximum swing radius of 530 feet.

Construction of the Jones Act dredge and the idler barge involved three Gulf Coast shipyards. The dredge itself was built at two yards. The hull and superstructure construction, housing, and assembly took place at the C&C Marine & Repair shipyard in Belle Chasse, La.

While not quite as large, the General Bradley is well underway. The new 28-inch dredge that will join the fleet later this year. The General Bradley will focus on Brown Water Division projects and is suited for both maintenance and capital dredging projects.

Last month, Callan Marine promoted Micah Morris to operations manager of its Brown Water Division, where he previously served as project manager, as the company’s portfolio continues to expand. Prior to this move, one person led both the Brown and Blue Water Division.