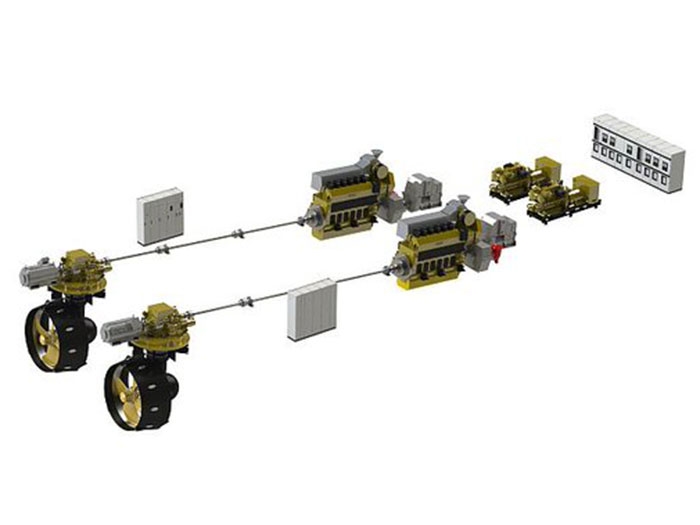 MAY 24, 2016 — Engineering specialists at Caterpillar Marine’s new Marine Solutions Center are this month overseeing delivery of the first Cat Marine Hybrid Thruster system. It is being delivered to an undisclosed shipyard in Singapore and will be commissioned in the middle of this year.

For vessels spending a high amount of time in standby or DP service, the annual fuel savings can be as high as 35%, calculated across the entire operating profile of the vessel.

The performance achievements are the result of Caterpillar’s holistic approach to optimizing vessel operations and reduced total cost of ownership for owners.

Typically, the Cat Marine Hybrid Thruster system could be used to downsize a vessel’s main engine, so that engine load is optimized, while also allowing the vessel to switch to diesel electric mode for low DP operations or in standby.

For example, a standard 7,000 hp standby support vessel featuring conventional powering would require two MaK 8 M25 C main engines at 2,666 kW @ 750rpm and a pair of Cat C18 gensets. With the new hybrid thruster system, the same vessel could instead use smaller 6 M 25 C main engines at 2,000 kW @ 750, and two booster motors mounted on the back of the Cat MTA 730 CP azimuth thrusters powered by twin Cat C32 generator sets. The booster motors and drives are controlled directly from the Caterpillar MPC 800A control system which also performs all mode selections, interfaces with the vessel’s PMS and provides a single point interface for the operator.

Caterpillar Marine believes that the Cat Marine Hybrid Thruster is a significant new market contender, for either retrofit or newbuild installation.

In transit operations and in diesel-mechanical mode, the smaller engines run at higher loads, consuming less fuel. In low-speed transit, either one or two gensets can power the main azimuth thruster in diesel-electric mode giving typical fuel savings of 10-15% at speeds in the 7-9 knots range, depending on hull profile. However, the biggest savings come during standby and DP operations where the vessel would operate in diesel electric mode with the main azimuth propellers running in the most efficient variable speed mode.

“The efficiency gains are remarkable,” says Jonas Granath, Manager Electrical Design, Caterpillar Marine Solution Center. “Of course, they differ from ship to ship depending on the ship service and OSVs come in a wide range of types and sizes. Typically, though, OSVs with DP capability spend a considerable amount of time in standby or in various levels of DP. With this new system, they will be able to use the diesel electric mode and run off the smaller gensets with the propellers operating economically at a very low rpm. It is in exactly these conditions where our new Marine Hybrid Thruster system offers the greatest benefits.”