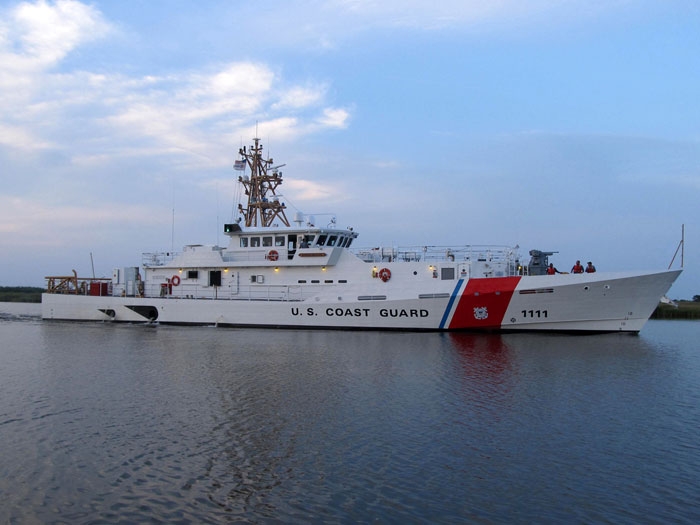 “We are extremely happy to announce the delivery of the latest FRC built by Bollinger, the William Trump, to the 7th Coast Guard District in Key West, FL,” said Bollinger Chief Operating Officer, Ben Bordelon. “We are looking forward to honoring and celebrating the heroic acts of William Trump at the vessel’s commissioning.”

The 154 foot patrol craft William Trump is the eleventh vessel in the Coast Guard’s Sentinel-class FRC program. To build the FRC, Bollinger used a proven, in-service parent craft design based on the Damen Stan Patrol Boat 4708.

The FRC has a flank speed of 28 knots, state of the art command, control, communications and computer technology, and a stern launch system for the vessels 26 foot cutter boat. The vessel has been described as an operational “game changer,” by senior Coast Guard officials.

The Coast Guard took delivery of the ship November 25 in Key West, where iy is scheduled to commission the vessel in January, 2015.

Each FRC is named for an enlisted Coast Guard hero who distinguished him or herself in the line of duty. This vessel is named after Coast Guard Hero, Motor Machinist’s Mate First Class William Trump. Because of his valor in action in the assault phase of the landing at Normandy, William Trump was awarded a Silver Star.

Trump, who had lied about his age, and enlisted in the Coast Guard in 1942 at 17 years old, had to make his way past heavily mined beach fortifications, while under heavy enemy fire, to set an anchor line for troops to follow. His helmet was creased by a German bullet.

He retired as a Chief Petty Officer, in 1965 and joined the Merchant Marine, serving for fifteen years aboard vessels of Belcher Oil Company. He died in July 2009 at age 85.